However, I’m blogging today about the importance of “taking the time” because you never know when that time runs out.

I went to my first anime convention in August of the year 2000. Anime Festival Orlando (“AFO”) was run by a local club called Anime Gaijin America and my then girlfriend/now wife won Best of Show in their costume contest. The next year, AFO had some growing pains and the person running it had to step away from doing so during the load in of the event. A woman on their staff, Karen Trudeau, and I had already been talking behind the scenes trying to steer the convention in a different direction to make sure it would succeed beyond that year.

One of my favorite memories from my early days in this industry was the stress she and I shared overhauling the entire AFO 2001 convention guide because the person assigned to create it made it less about the convention and more about showcasing his girlfriend’s fan art. We literally split the guide, picked pages, and rewrote all the content together in 24 hours. We barely made our print deadline, but we made it happen. As those of you who work in the realm of anime and pop culture conventions know: “shared stress” is a powerful bonding tool.

So when the con chair stepped down from his position at AFO 2001, Karen and I grabbed a couple of radios and, together, we ran the convention. Like many events at that stage of development, it was a mess behind the scenes and we did our best to make sure that attendees never really saw it as they roamed around the Hilton in Altamonte Springs, Florida. We leaned on our friends to help keep the convention together with duct tape, sharpies, and a lot of passion. 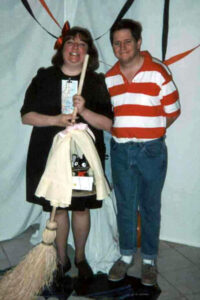 That experience prompted me to create Wasabi Anime shortly after. Wasabi Anime’s first ever event took place in October that same year: Wasabi Anime’s Halloween Cosplay Party. Karen was there to support the new club and arrived resplendent in a Kiki cosplay.

Last weekend was the 21st Anime Festival Orlando. Unknown to most of the attendees there, Karen Trudeau, still one of the event’s co-owners and show runners, had passed way mere days before. With all the elements in place behind the scenes, the convention moved forward. Myself and a number of folks from “back in the day” took the time to drive up to see each other and share our memories.

In December of last year, I stopped by Holiday Matsuri in Orlando to check on my team who were on-hand running a booth promoting WasabiCon. While there, I stopped by the Anime Festival Orlando booth and saw Karen. We chatted the usual fun smalltalk you have with others in our industry. We hugged, said good-bye, and went on with our respective day.

I’m glad I took that moment. You should always take “that moment” when it’s there.

Rest in peace, ma’am. Your impact in the Florida anime fan community carries on.

One year ago pop culture conventions stopped happening. Last weekend I went to one that’s now run twice during the pandemic.