I’m Still Not Dead and Other Health Updates

For those of you that frequent this website outside of pop culture convention insights or adventures with food objects larger than my head: I’m still alive.

For those of you that don’t know why my current status of “actively breathing” comes as a surprise, take a moment to read this. Otherwise, the rest of this post won’t make much sense.

The past two weeks have seen a lot of dried scabs flaking off bit by bit. (I know… gross.) The big nasty one on my left elbow was the first one to start coming off. Then my right thigh. Then my lower back. Then the rest scattered all over me. Most of them were small surface scratches, so the superficial damage from those is fading.

The bruising, too, started to lighten up pretty quickly in a lot of areas. The only place it still looks “bad” is near my abdominal laceration. I’ll explain in more detail in a bit.

STAPLES IN THE BACK OF MY HEAD

Yesterday I went to a follow up appointment to have my arm x-rayed to see how my healing is progressing. While I was there, they removed the staples and stitches I have. The ones in the back of my head have been a particular nuisance since they were starting to catch onto the fabric on the back of my couch from time to time.

That, and the fact that they were easy fodder for self deprecating Frankenstein jokes.

When the person removed them from the back of my head, I ran my hand along the area to feel them gone and thought something seemed “off” somehow. Tyron, the man who removed them, pointed out that when staples were put in by the medics, they had to cut off some of my hair to make it easier to treat the wound.

And you thought YOUR pandemic hair was bad.

This part has been tricky. First, I’m still getting over the lost opportunity of potentially squeezing in a liposuction session while I was gashed open. As a result of this missed chance, I still have my quarantine enhanced “spare tire” around my midsection. A few days ago, the area around my injury started to become firm. I called the hospital and Shannon immediately Googled the potentially millions of things wrong and somehow both came to the same conclusion: it’s fine. It’s normal. Put a heating pad on it from time to time and massage it and it will eventually fade.

Yesterday also saw the removal of the sutures and staples from that area of my body. It’s still healing, but it’s being held together by my own flesh now. The bruising isn’t gone, but it is slowly fading. I’m hoping another week or so and it’ll just be an odd looking scar which will (very likely) end my aspirations of being a professional bikini model.

Of all my injuries, this one is the most complicated and will be the hardest to overcome. My wrist and elbow were both pulled out of joint. (Note the photo of the x-ray that I used as the Featured Image in this post; that’s my elbow.) The doctors in the emergency room were able to pop everything back in cleanly, but the tendons and everything around the joints were just a mess.

When I was in the hospital the night after the accident, there was a discussion regarding going into surgery to try to correct some of the damage. The next morning, however, the orthopedic specialists on staff decided that things had gone back together cleanly enough that we should wait to make a decision in two weeks.

Yesterday was that two weeks, and more x-rays were taken. Additionally the triple layered splint was removed and I got to see my damaged and shrunken arm up close. 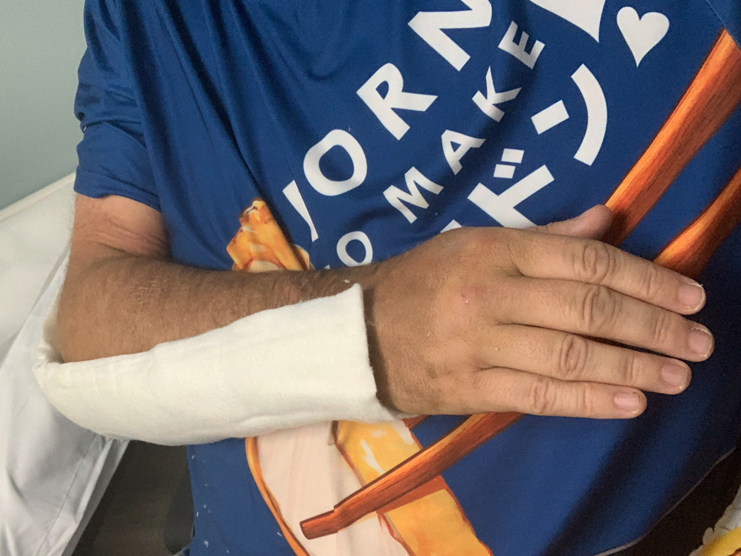 I can’t extend my arm all they way out or all the way in. I am not allowed to move my wrist from side to side, but I can move it back and forth. However, the range of motion in doing so is very limited.

Surgery still isn’t completely off the table. My next steps, though, are taking the splint off a few times a day (the new one is removable) and to carefully try to extend my arm as far as my elbow will allow. Additionally, I start physical therapy on Thursday to get other directions for continuing the healing process.

The most dangerous “wild card” is my wrist. Things need to heal correctly for it to work again. This has been made more challenging due to an old injury. You see, I broke that exact wrist when I was a junior in high school.

Sports injury, Tom? No, Internet. I got into a fight at a Star Trek convention and wound up in the emergency room when I was seventeen.

So I’m now living the dream of “one day at a time” and, quite frankly, it’s the best I can do given the circumstances. I got work done today. I submitted more medical insurance info. I’m sore…

But I wrote this blog post, and I did it typing with two hands.

‹ The Blog Post About That Time I Almost Died (which was, by the way, the Sunday before last) › List of BEST PICTURE viewings… UPDATE: Spotlight