In 1994 I moved out of dad’s house after two years of sporadic study at my local community college and ventured into what parents refer to as “the real world”. He moved to Georgia with my sister, his future second wife and her two children. I had already lived in the peach state in the eighties and my experiences there were enough to let me know that I was probably better off staying in Florida.

It was time for me to head out on my own and pay my own damn rent, so I got my first job in a theme park: I became a Ride & Show Operator for Universal Studios Florida on the Jaws ride. I was hired in December of 1994 at a starting rate of $5 an hour.

As you grow older, you hear folks talk about the friends you have in life that you met that helped define you in your youth. These are typically high school and college age relationships that are forged as you are finding your identity in that period between late adolescence and what is perceived as becoming a “full adult”. For me, those connections were the ones I found working in a theme park ride while perpetually rescuing sun-baked tourists from a mechanical shark. Our attraction team was more than a staff, it was a bona fide family – so much so that, to this day, I miss many of the people in that photo with a touch of nostalgia.

You see, Jaws was THE ride to work at in Universal Studios back in the day. It was the springboard for stepping into management because it presented all of a theme park ride’s challenging elements in one centralized location around a man-made lake:

Jaws was the boot camp for the best of the best when it came to operating a theme park attraction. I made dozens of friends that I still keep in touch because of my experiences there. As a matter of fact, over 10% of my Facebook friends were met via “the mistake on the lake” – an affectionate nickname given to the ride by skippers. 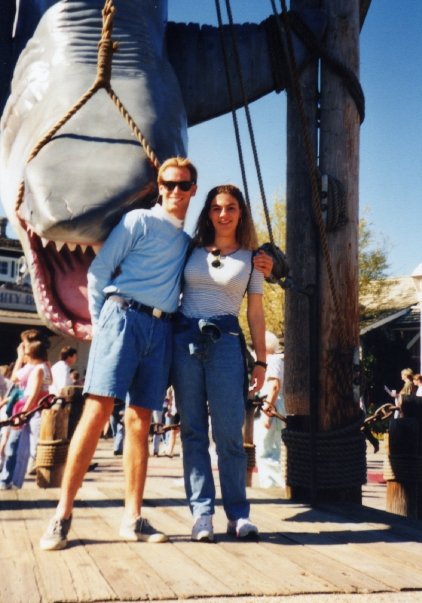 That’s 21 year-old me and my friend Karine in that photo. I met her when she rode as a guest on my boat at the Jaws ride sometime in 1995. We subsequently became penpals, something that still existed back then since email wasn’t yet mainstream, and we’ve remained friends to this day. I got to introduce her to my wife recently when she visited the States with her daughter and we all went to dinner in Orlando. It’s a small world after all.

My time spent at the Jaws ride at Universal helped define a large part of who I am today. Thus, when I heard the news that Jaws is closing at Universal Studios Florida on January 2, 2012 – I couldn’t help but be saddened a bit. The silliest things can sometimes be the most important in our lives, and we often don’t realize it until it’s time for those things to fade off into the sunset.

Also feel free to post a reply of your memory of Jaws the Ride on my blog here. I’d love to share in the nostalgia.

EPILOGUE: The impromptu skipper reunion took place as planned and here is the Orlando Weekly article it. Maybe someday I’ll post the videos and photos I have form that day, too.