This is the second in a series of posts I’m making about my visit to Walt Disney World’s Magic Kingdom the day before they opened to the public after being closed for four months due to COVID-19.

Yesterday I laid out everything my wife and I experienced during the Annual Passholder preview at the Magic Kingdom on July 10th. Having worked in the theme park industry in the late nineties and early two thousands – and the fact that I’m on the Internet which means I HAVE AN OPINION – I thought I’d share my suggestions of how Disney might be able to improve or streamline some of the their newly implemented procedures. 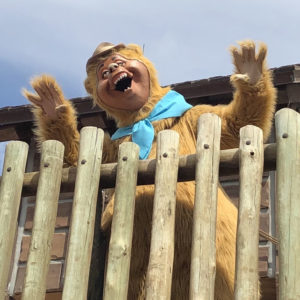 Now is the time, in my humble opinion, to pull out all the stops in regards to costumed characters in the theme parks. Instead of localized ideas (characters appearing near attractions themed after their source material) or “greatest hits” (i.e. princesses) have characters just show up everywhere as random photo opportunities. When we visited we saw the Wicked Stepsisters at the castle and the Country Bears on the floor above their jamboree, but why stop there? Have them more haphazard and all over the place for short periods of time. If you see a group of park attendees bunch up to get a photo and not social distance, disappear and show up elsewhere. Make it a constant game of “Where’s Waldo” and have something for park attendees to come across since shows are no longer in operation. What parent wouldn’t get a quick thrill out of seeing Darkwing Duck or Goliath from Gargoyles randomly come out at the castle? Make it passive entertainment that feels like a game. Create randomness in the park attendee experience to make it more memorable vs. a sanitized and scaled down version of what we all remember.

BETTER ANNOUNCEMENTS TO AVOID THEM BEING IGNORED

Regular park goers/Annual Passholders like to joke with one another by saying “¡Por favor manténgase alejado de las puertas!” since we all know the announcement. Part of the reason behind that, though, is due to us being effectively desensitized to it by hearing it over and over and over again. While in the park, a clear voice would come booming over the loudspeakers reminding everyone to stay six feet apart, wear face coverings correctly, and wash your hands. However it’s a “standard” voice and repetitive. My suggestion? Create a series of announcements featuring a variety of character voices that will keep attendees on their toes waiting to hear who the “next one” making an announcement is. I have spent far too much time brainstorming on this one, and here are some examples:

You get the point. You can create dozens of these and randomize them each day.

In my previous post I told the story of the woman who took her mask off during Thunder Mountain and how my wife told a staffer (“Cast Member”) about it who proceeded to do nothing. This can’t happen. Even if its a “he said/she said” scenario, staff need to follow through on EVERY instance when this is observed. Lack of doing do will slowly erode consumer confidence in safety which is exactly the opposite of what theme parks need to do to make attendees feel safe. At the risk of sounding old… “Back in my day” of working at theme parks we had extensive training for handling uncomfortable guest conversations and diffusing these circumstances. Theme parks need to revisit theses standards again to be able to manage these tough situations more effectively. 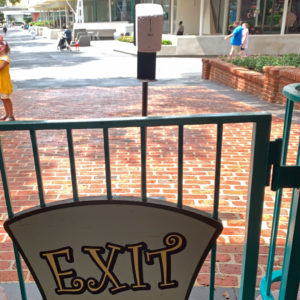 There were plenty of hand sanitizing stations around the park and we never ran into an empty one. However, having one single station at the exit of an attraction completely undoes the work that was done by distancing attendees in the queue and on the ride itself. Everyone exiting the attraction runs to the one sanitation station and waits next to each other. Attractions need four to six sanitation stations at the exit six feet apart to spread the exiting attendees apart from one another.

I know: I made fun of the fact that there were too many signs in my last blog post, but this is one that might fix a problem I witnessed. The social distancing line outside the restaurant we went to (Cosmic Ray’s Starlight Café) had a line where people could wait to get inside after ordering food. Make this area OFF LIMITS unless you have a pickup notification on your phone. Too many people just order and wait and they need to be discouraged from hanging around. It was one of the worst clumping situations I saw in the whole park.

No system is perfect, but industries should always look for ways to improve – especially when looking to solve the daunting challenge of “mass gatherings in a pandemic”. Disney’s doing a solid job of seeking the answers even though the timing of doing so can be considered questionable. (Florida added 12,624 new COVID-19 cases yesterday.) Either way: here we are. Have you visited a theme park since they reopened? What do you think they could be doing better?