This was originally set to be one long blog post, but it made more sense to break it up into three separate ones to focus on different discussions. This is the first of those with the other two forthcoming.

On Friday, July 10th, I attended an Annual Passholder preview at Walt Disney World’s Magic Kingdom. That same day, Florida confirmed 11,433 new cases if COVID-19, so my wife and I were ready to step away at any given moment if we were made to feel unsafe somehow.

It was overcast and raining, so we dressed and packed appropriately and planned to be there when the park opened at 9:00 AM. At 8:18 AM we pulled up to the parking entrance where cars were already waiting. At 8:38 AM they let cars in and we were parked by 8:53 AM. 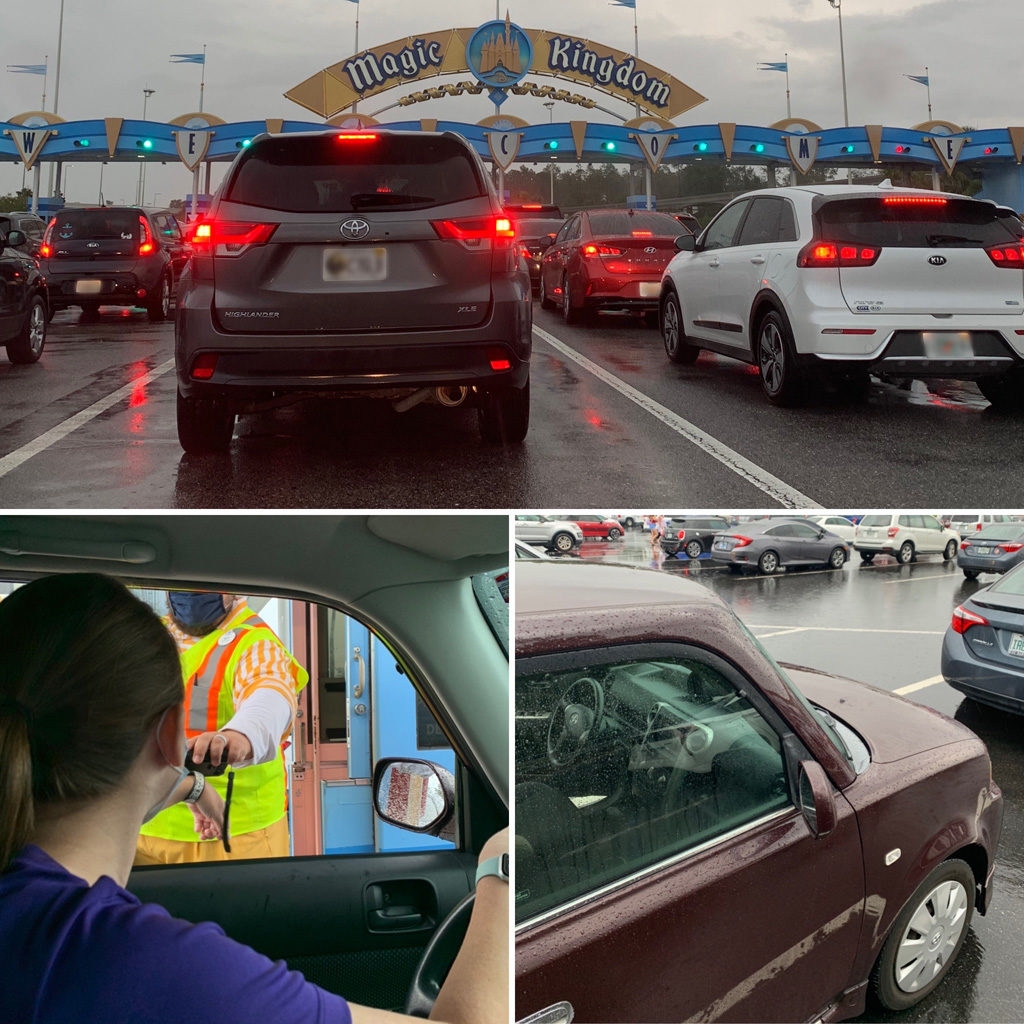 We were directed to a space fairly close to the Ticket and Transportation Center so there were no trams. After gathering our bags and putting on raincoats, we walked toward the entrance where we were introduced to the new screening area. Signs signs, everywhere there’s signs… 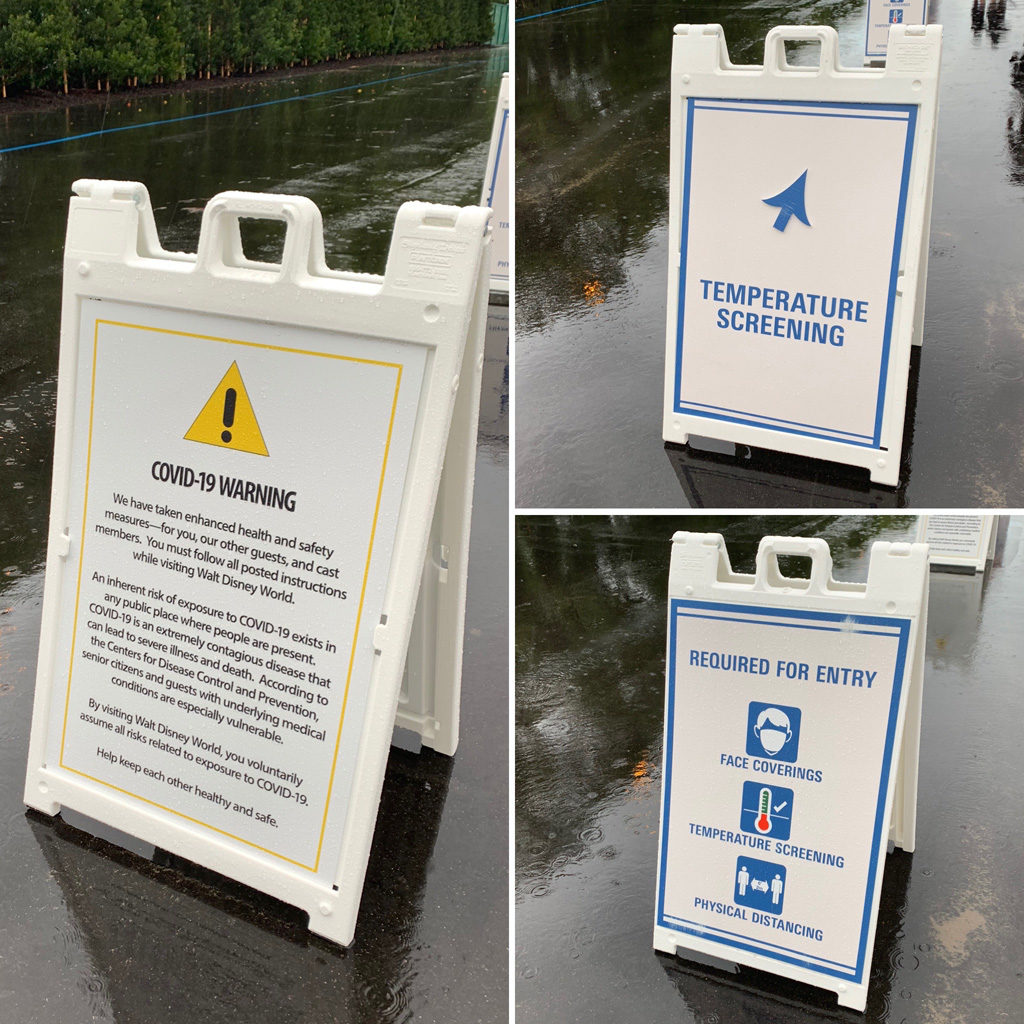 I walked to the tents set up out front (literally five minutes from where we parked) and had my temperature checked and my backpack searched. The search was due to the metal detector sensing my handheld tripod. It was quick and the security staff never touched my bag or its contents. They had me unload it in front of them until they saw the tripod and then told me I could repack everything and move along. The whole experience was pretty smooth and featured (you guessed it) a SIGN!

We opted to get on the ferry instead of the monorail and boarded at 9:03 AM. Twelve minutes later we disembarked at the Magic Kingdom. It wasn’t very crowded so everyone was able to distance themselves and all the benches had (surprise!) signs stating “FOR YOUR SAFETY  NOT AVAILABLE”. 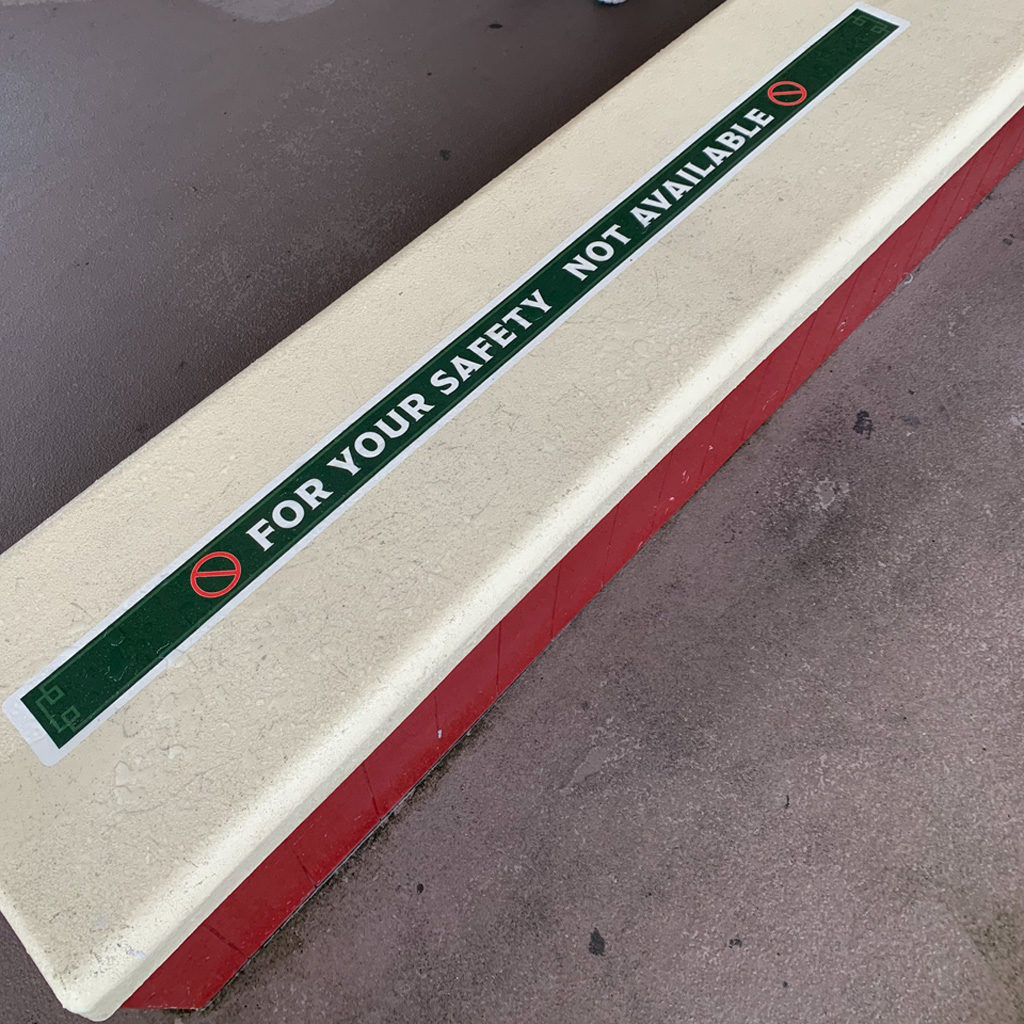 We walked over to the gates and bumped ourselves in wirelessly using our Magic Bands (there was no line) and immediately found Starbucks. I got in line to grab some caffeine at 9:22 AM and experienced Disney’s first line management operation within the park. Spaces were set six feet apart and once you ordered you were asked to stand in a socially distanced waiting area for your drinks. What was interesting was that if all the waiting spaces were filled, you were asked to wait at the register and the entire line would wait behind you. This was when I first realized what will be, in my opinion, the overall challenge of a socially distant theme park concept: it only really works with a small number of people. I honestly don’t think that this will work on any sort of large scale. If more than twenty people had wanted to get Starbucks at the same time, then there would very likely be crowding out in the street because, lets face it, that’s just the way people are.

I exited with my nitro cold brew and took a look at the new Main Street which featured, you guessed it, a plethora of signs: 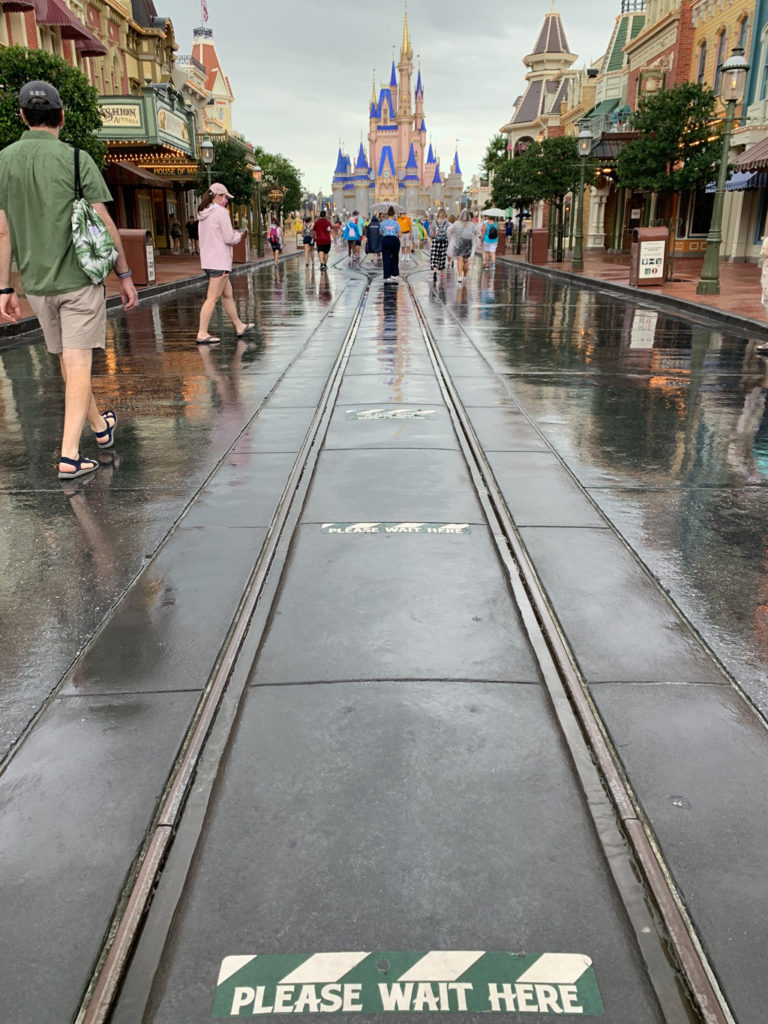 Let’s just get this out of the way since I keep bringing it up. There were A LOT of signs. One of the key elements of Disney’s plan for park attendees maintaining social distance seems to hinge on a person’s ability to read and follow directions. As someone who worked on a water ride in a theme park with a sign out front that said “YOU WILL GET WET” and still had to deal with attendees complaining about drenched clothes afterwards, I have some serious doubts about how well this can work. People on vacation attempting to immerse themselves in escapism tend to ignore things that are right in front of them. Anyway, here’s a collection of signs in the park that we saw: 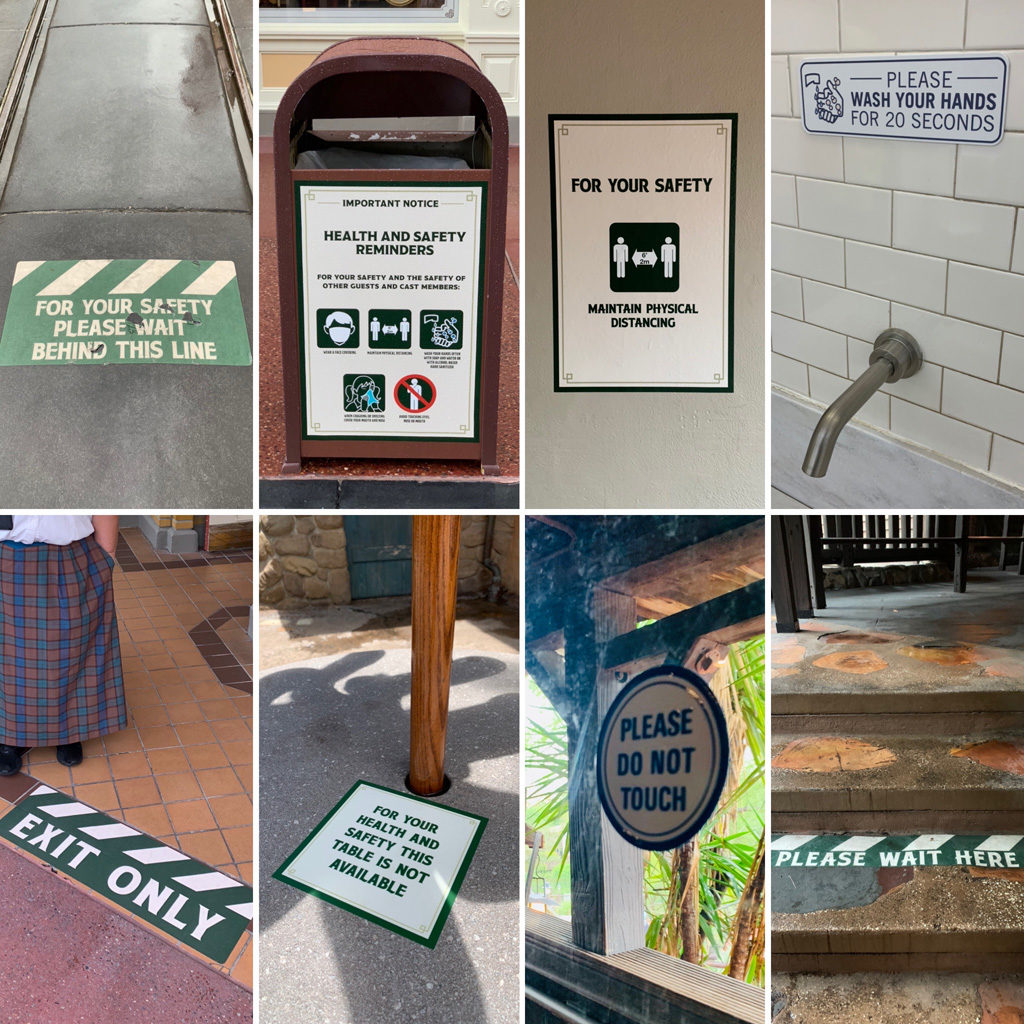 At this point I should reiterate how NOT crowded the park was. It felt like the “off season” days in the nineties and it was easy to navigate around people while going from place to place. I would estimate that over 90% of the people we saw were wearing masks correctly. That other 10% were the people who would pull their nose out (defeating the whole purpose) or that one dad in a family wearing his mask on his chin while the rest of his family were wearing face coverings correctly. We did witness a supervisor approach someone in line while we were waiting to get on the Seven Dwarfs Mine Train ride and tell the person to wear their mask correctly (the guy had his nose out) which was great to see. However, this ultimately highlighted the other challenge theme parks are going to have: enforcement. For example, here was our “worst case” scenario we dealt with: 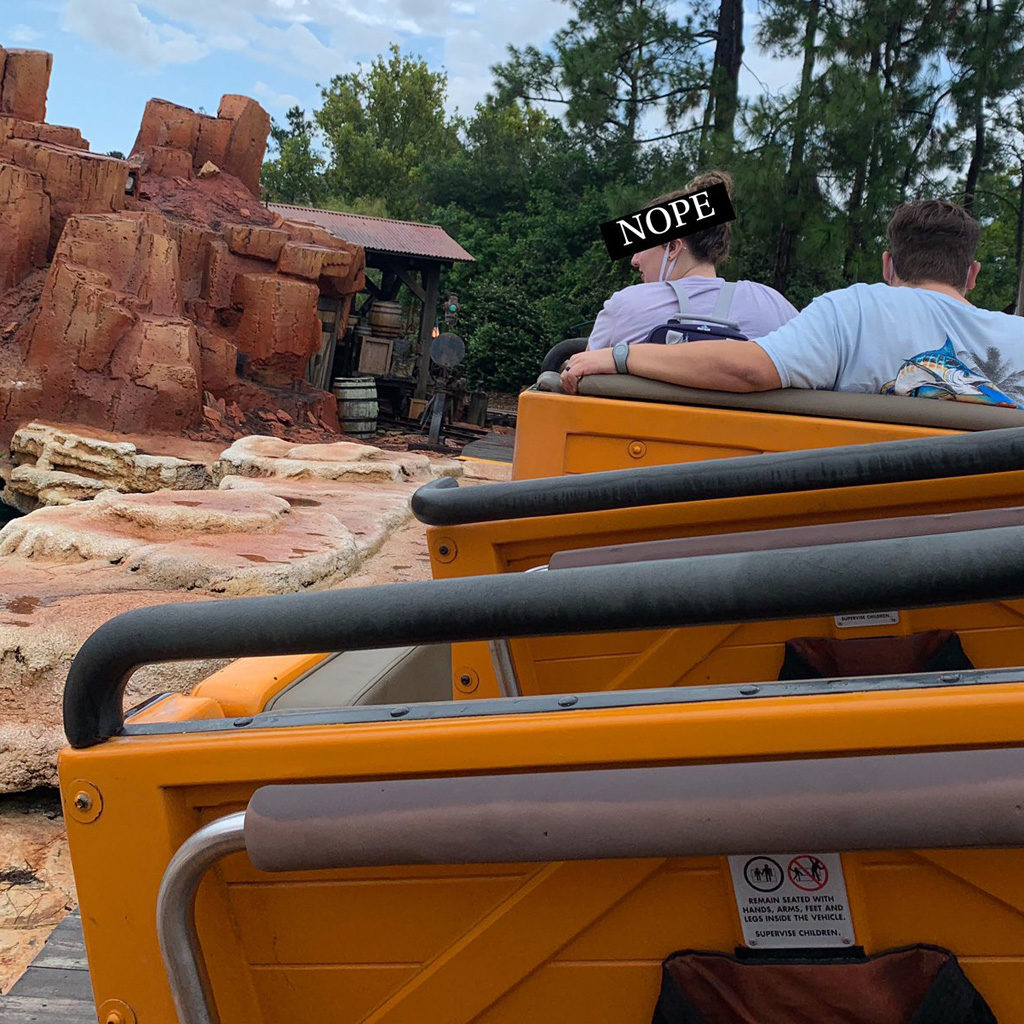 The woman in the photo was in line behind us for Big Thunder Mountain with her significant other. Instead of watching where she was going, she was constantly staring down at her cell phone and not paying attention. As a result, she would walk up directly behind my wife and I (within a foot) a number of times while we were all going through the queue. When we got on the ride, she and her companion were seated in the car in front of us. Once the train exited the load area, she pulled her mask down so she could scream the whole time without a face covering. When the ride concluded and pulled into the station, the woman immediately pulled her mask back up so none of the staff would catch her in the act. My wife let a ride attendant know, but no one approached the woman or discussed anything with her.

We stayed in the park until about 4:30 PM. During that time we managed to see the following:

All attractions had socially distant queues. Signs were clearly placed everywhere and regular announcements were made to remind you to maintain six feet from other parties. 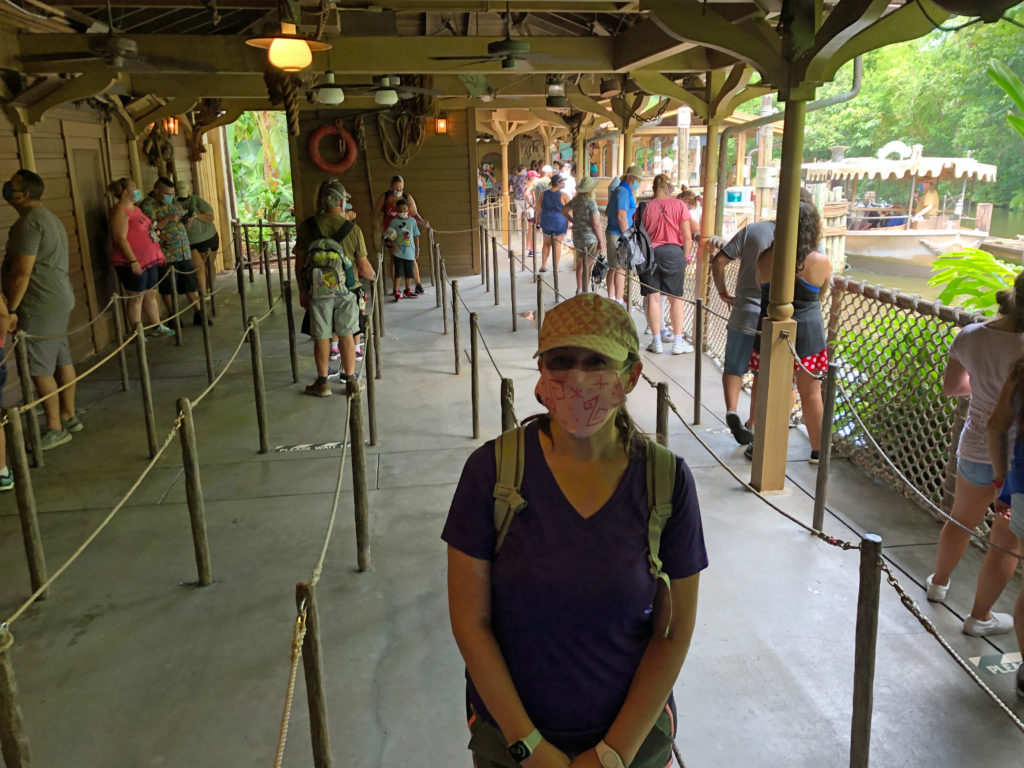 Wait times were between 5 and 30 minutes, but once you were in line that was subject to change due to an announcement letting you know that there would be a delay due to the ride being sanitized. This was something we saw take place first hand on the Jungle Cruise: 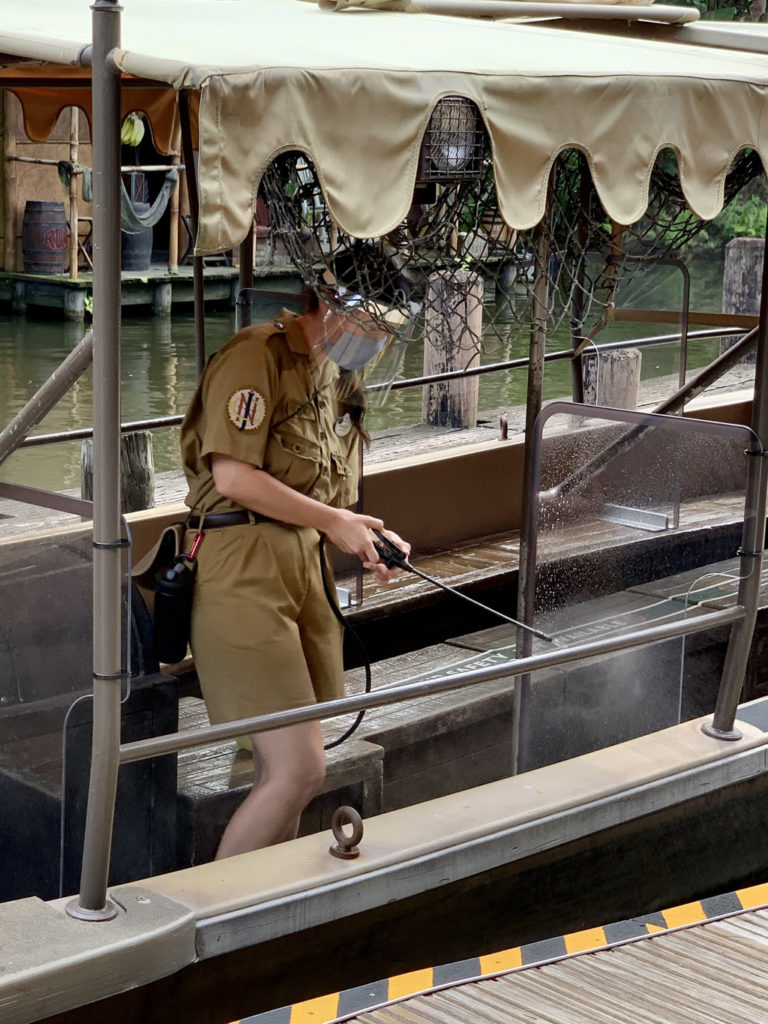 Other things of note:

Did we have fun? Yes. Was it stressful? Of course, but it wasn’t anywhere as stressful as what I was expecting. Walt Disney World it trying to solve the puzzle of mass gatherings in age of COVID-19, but questions remain as to whether or not they are trying to do so too soon. It should be noted that their neighbors, Universal and Sea World, have been open for weeks, though, and there is no “play book” for right and wrong at this point.