Bill & Ted’s Excellent Adventure came out during my freshman year in high school. During that time I was still transitioning from “preppy Polo shirt wearing” Tom to “I should try this acting thing” Tom. This evolution was made easier when I met my friend Felicia (then “Dave”) and together the two of us would ramble on and on about movies, Bloom County, and the importance of art and pop culture in our lives.

During our junior (senior?) year, armed with the VHS camcorder my parents got me for Christmas, we jumped through all the required clerical hoops to create the Martin County High School Motion Picture Club. We were serious about it – to the point that we event built a float and marched in the homecoming parade that year. 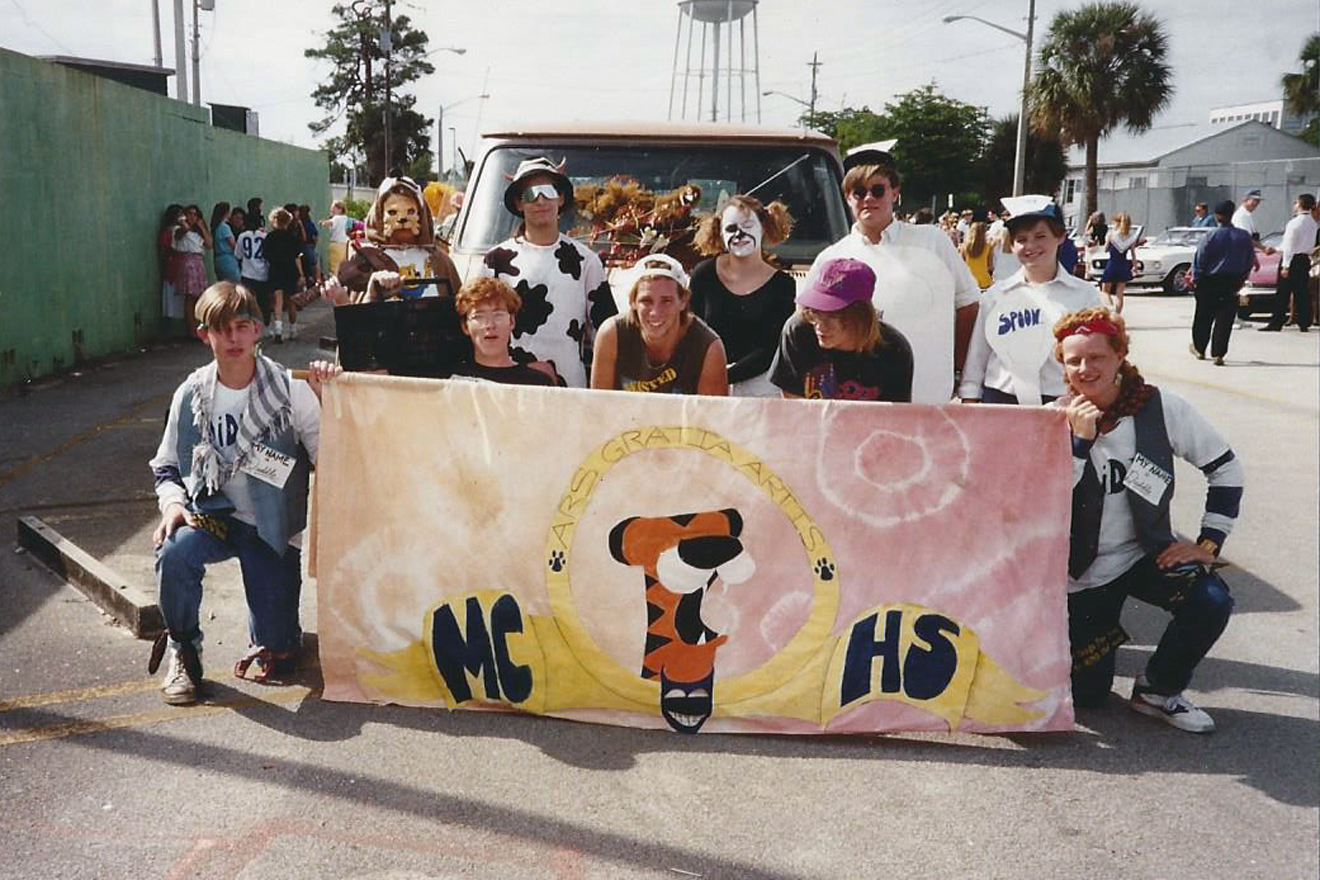 In case you’re wondering what you’re looking at: the homecoming theme was nursery rhymes and we chose “Hey! Diddle Diddle”. Our float was a trailer with a moon cutout on each side that had Felicia dancing to “We’re Not Gonna Take It” by Twisted Sister while dressed as a cow.

The cow jumped over the moon, or – in this case – rocked out.

The logo, Felicia’s design, was a characterized version of our high school mascot (the Tigers) with the classic MGM “Ars Gratia Artis” around it.

The club would meet and we’d do, on campus, what Felicia and my next door neighbor Rob had already been doing previously in my house and back yard: making ridiculous short films to make ourselves laugh.

For the younger readers: imagine YouTube but without the Internet and the only way people knew about the videos was by passing around copies of VHS tapes.

Our most popular short film involved a garbage disposal accident and a lot of ketchup.

After doing on-the-fly stories by crash editing them and often just re-filming scenes in order on the tape, we decided to pen an actual script and make a fully realized movie complete with locations, a shooting schedule, props, and even the use of professional editing equipment at our local public access TV station.

Another note for younger readers: at that time, I had a computer. It was an Apple IIc. No mouse. No Windows. No macOS. And no way in hell it could do ANYTHING with video processing.

Felicia and I immediately knew the film we wanted to make: our own Bill & Ted.

If you live(d) in Stuart, Florida, there are a number of notable locations in the movie: the Treasure Coast Square Mall food court, the Lyric Theatre, the Roosevelt Bridge, and those Delorean shots in the movie? That’s the parking lot of a Burger King that (last time I checked) was still there. Felicia convinced a local attorney(?) to park it there for us and let our actors film getting in and out of it one afternoon for a couple hours.

Once we finished the film, there was no Internet to upload it to. We watched it. We made copies. We gave copies to friends and family and they watched it. Back then, the novelty of shooting a full film on VHS in small town South Florida was worthy of local conversation – regardless of the production’s actual quality.

Fast forward to about eight years ago. I hooked a VCR up to my computer and started the process of converting old VHS tapes to digital files. One of the first ones I did was Dave & Tom’s and I immediately uploaded it to YouTube. You can watch the whole film here.

Since then, the video has earned around two hundred views per year. I mean, those aren’t BTS level views – but SOMEONE has watched the damned thing. Two of those someone’s were named Bird & Gutter and they featured the film in their “Worst Movies On…” channel back in 2016.

And now, over a quarter of a century later, I’m waiting to watch a decades-later follow up to a film that had pretty profound impact on teenage me. I’ve seen them on an excellent adventure. I’ve seen the go to hell on a bogus journey.

Tomorrow I’ll watch them face the music, and (hopefully) seeing them do so won’t suck.