“Your scientists were so preoccupied with whether or not they could, they didn’t stop to think if they should.” -Ian Malcolm in Jurassic Park

Three weekend long pop culture events decided to move forward in the United States in the midst of the COVID-19 pandemic last weekend. Similar to the conversations that were sparked when theme parks in Florida opened again, the questions of “could” and “should” are happening all over social media. That is apparently moot at this point, however, since these sort of mass gatherings are now happening again regardless.

Here in Florida, we’ve already seen a one day toy show and a one day pop culture event take place this summer. Both those shows’ promotors ran their single day events AGAIN this past weekend, but in different cities this time: Clearwater and Orlando. “Because Florida,” two events running on one weekend just isn’t enough. So a third event, this one a full three days, also took place in Jacksonville, Florida: Collective Con. Since I had already experienced the COVID-19 versions of the other two, I decided to drive to North Florida.

BUT THIS IS FLORIDA, so of course there’s more to the story…

Prior to my departure, I was sent this tweet from a friend. Apparently anime voice actor Vic Mignogna had scheduled an autograph signing about a mile and a half down the road from Collective Con, but he was not appearing on behalf of/in association with the event. He just decided to stop by and, apparently, do his own thing. For those not familiar with Vic, he was engaged in a legal battle for the past couple of years with fellow voice actors (and his former employer) regarding a series of allegations levied against him.

We’ll get back to that, though, in bit. For now, let’s talk about Collective Con. I arrived at the event on Saturday at around 12:45 PM. Parking was $10, which was reasonable, but that information wasn’t listed anywhere on the event’s website. When I pulled into the parking lot, an attendant stopped me to do a health and temperature check while I was still in my car. I was asked:

He and everyone in the tent doing the checks/taking parking fees were wearing face coverings. The team parking the cars were not and they parked me directly next to another vehicle without any extra spacing. When I got out of my car, I decided to walk the parking lot (grass, not paved) and count the total number of vehicles as a gage for how busy the event was. There were approximately 215 total.

As I walked towards the building’s entrance, I saw a barrage of signs greeting me: 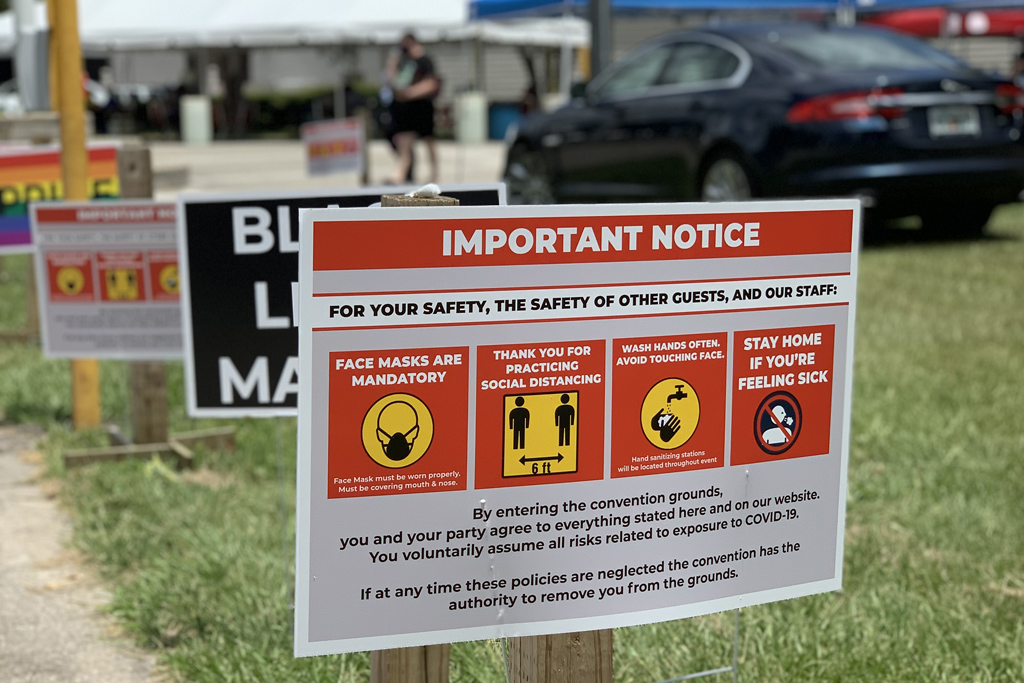 Also near the entrance, I saw four food trucks, an info booth for Visit Jacksonville, and Life South was on hand taking blood donations.

At registration (located outside the building under a tent) was a sign full of the proverbial “small print” outlining the policies and procedures in relation to attending in the midst of a pandemic. It included something that theme parks are doing and I expect all events going forward will have: a disclaimer. Theirs read: “You voluntarily assume all risk related to exposure to COVID-19.” At the entrance, a poster was taped up showing the somewhat sparse schedule. It included information that time was allocated between each event to clean and disinfect. I paid my $40 for a one day pass and entered. It should also be noted that Duval County, where the event was taking place, has a mandatory mask order in place. 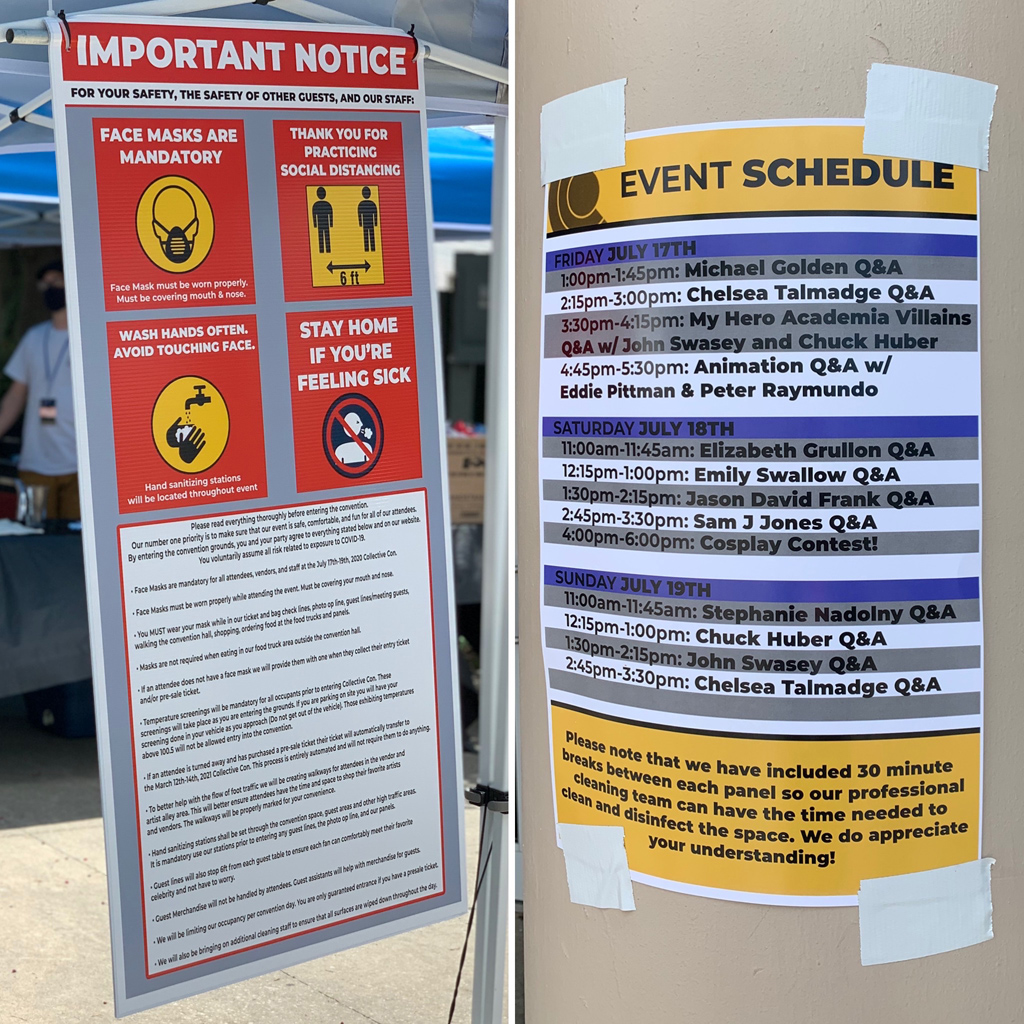 Once inside, here were the key things I noticed:

I ran into a vendor later that evening on my way out of town, and I asked about the rest of the day. According to him, the crowds thinned out almost immediately after I left. This was reinforced a bit by the fact that a couple leaving Collective Con walked to the car parked right next to me and left at the same time. This meant that they spent approximately the same amount of time at the event: about two hours. I spoke to others afterwards who confirmed that most of the crowd dissipated around 3:00 PM.

According to his Twitter, Vic planned to host his signing at the Hyatt Regency Riverfront at 5:00 PM. I got there around 20 minutes early and inquired with the front desk about it. The staff informed me that he was set up on the third floor in the Orlando Room. I got there at 4:45 PM and saw about eight people in line. At 5:00 PM the line was up to thirteen. 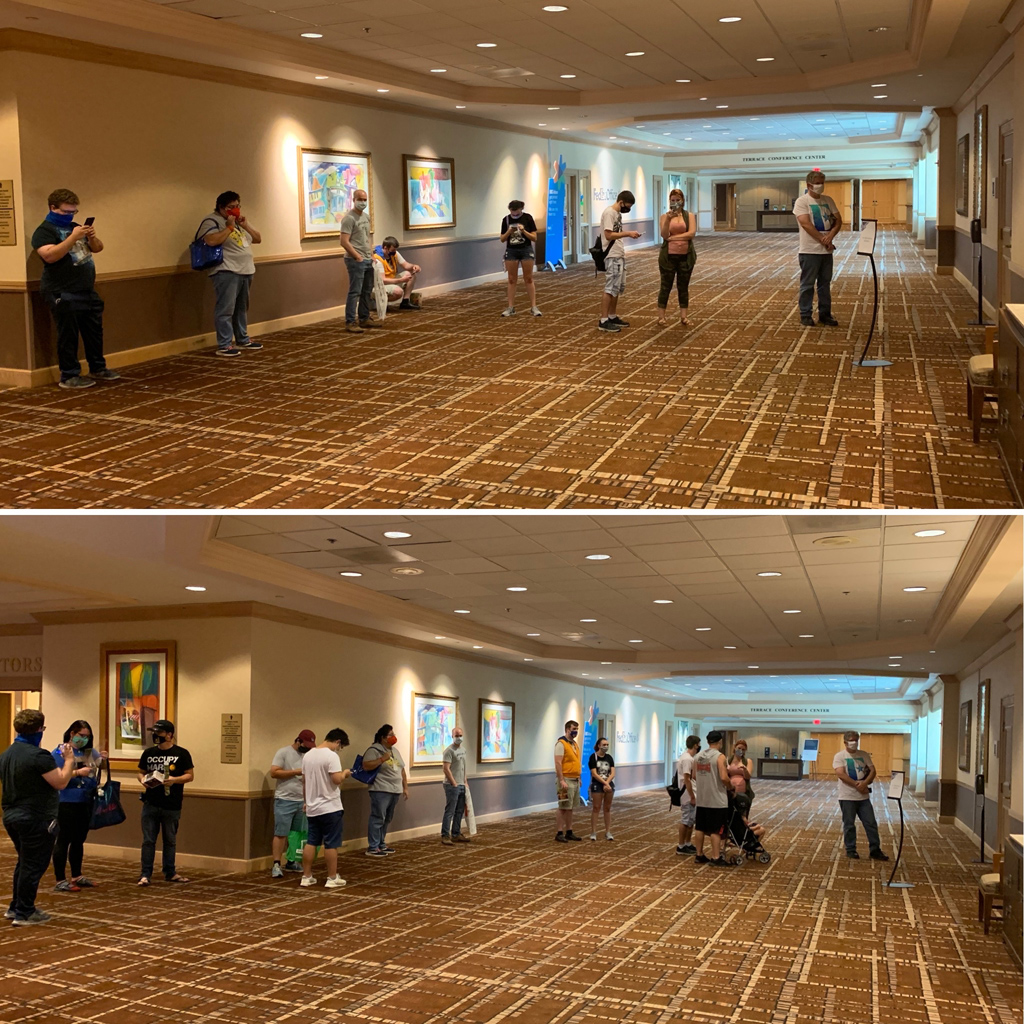 Vic came out and said, jokingly, that Vic Mignogna couldn’t make it. His fans chuckled and he welcomed them and thanked everyone for coming. Next he held up a mask to his face stating he was “doing what [he’s] supposed to do” and wearing a mask, but he never actually put it on while I was there. That said, Vic did make it clear that those there should maintain social distancing and that he wanted everyone to do whatever they felt they needed to do to feel safe.

“I’m cool without it if you’re cool without it,” he said regarding not wearing masks when taking photos together at his table. “Last time I checked,” he continued, “we all live in America.”

In the room there was no tape on the ground or any guidance for maintaining social distancing. No one was on hand to manage the line or to keep people spaced apart. Those attending Vic’s impromptu gathering were expected to manage themselves.

I was around for about an hour, and I never witnessed Vic putting on a mask the entire time I was there. 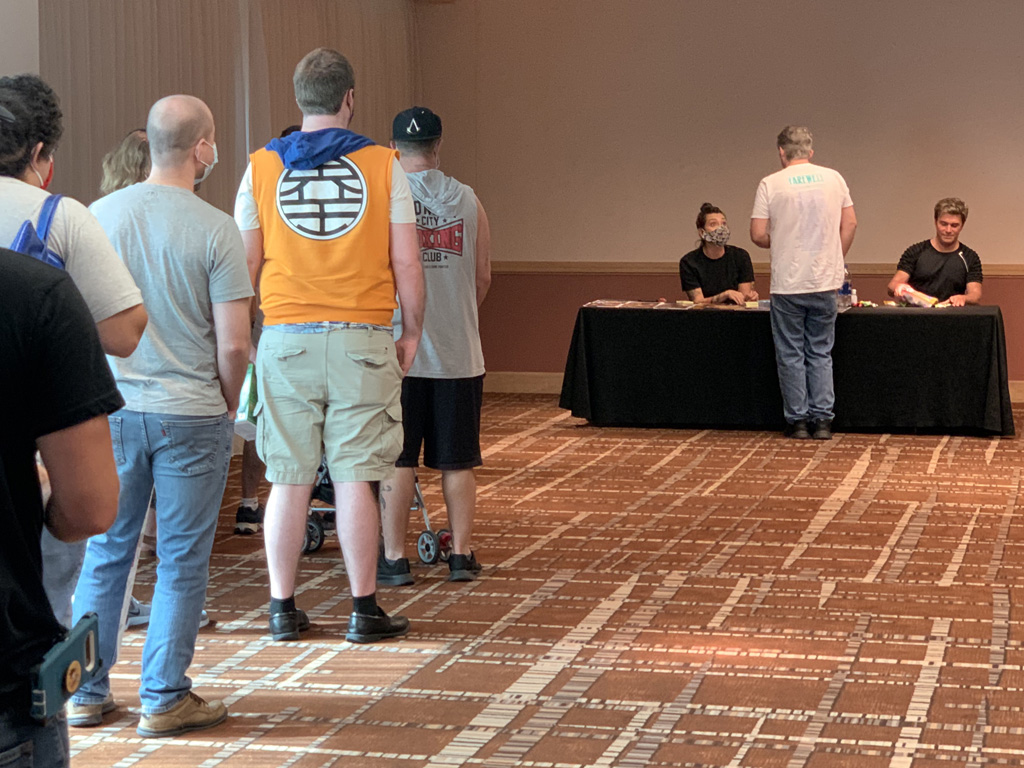 A few fans posted the photos they took with Vic on Twitter afterwards. No one in any of those photos is wearing a mask.

When I left at 5:50 PM, the line was more or less gone, but I witnessed two more fans walking in as I was departing. I don’t know how many people show up that evening (he was scheduled to sign until 10:00 PM) but he thanked them all on Twitter afterwards.

Conventions are operating again. Theme parks are opening. Concerts are apparently starting to have a go at it, too. As of this writing, the CDC reported 67,574 new cases and 877 new deaths on Saturday for a total of 3,698,161 total cases in the United States and 139,659 total deaths.

Should these things be moving forward, or are we going too soon?

‹ Disney’s Magic Kingdom during COVID-19: What Can Conventions Learn Here? › The Blog Post About That Time I Almost Died (which was, by the way, the Sunday before last)