Kenny Rogers is on his “The Gambler’s Last Deal” tour – presumably his farewell tour – and Shannon and I went earlier this month. Now, I’ve been trepidatious about going to see him in concert for some time because (quite frankly) he doesn’t look like the Kenny Rogers I grew up knowing. Sometimes plastic surgery doesn’t always work out the way people hope.

The theater we saw him in was a smaller one, so our tenth row seats made for a great view. Worry set in a little bit, however, when he hobbled onto stage and took a seat on a stool in the middle. Kenny apparently had knee surgery very recently and, he explained, it had left him feeling a little worse for wear than he was expecting. 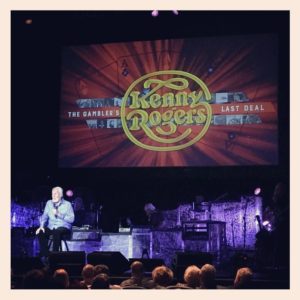 All worry dissipated, however, the further into the show we got. Like the Dolly Parton concert last year, Kenny was a vibrant personality and shared humorous anecdotes about a storied career that energized his musical performances. He was great – and we enjoyed every moment – even the songs from the sixties that I had never heard before. His “show must go on” attitude backed by decades of stage experience made the event that much more engaging. Kenny connected and mesmerized the audience with his good ol’ boy charm and charisma all the way to his finale: The Gambler.

So while Kenny didn’t look the the “teddy bear” Kenny I grew up knowing, his heart and talent were still intact. It was a truly memorable concert.

ADDED NOTE: Sometimes we’re lucky in life without knowing it, and Shannon and I were very luck that evening. Kenny Rogers passed away just a couple of years later on March 20, 2020.

Concerts I’ve Been to So Far: