Today We Said Good-bye to Karma the Dog.

[NOTE: some of the links in this post need to be updated.]

Karma the Dog came into our lives when she was only eight months old: thirteen years and two months ago. She was a Schnauzer/Yorkie mix (“Schnorkie”) that fell into our lap after being rescued from a household that didn’t appreciate her. She was timid when we brought her home, but quickly opened up when she realized that she was safe with us. We were her family. We were her home. 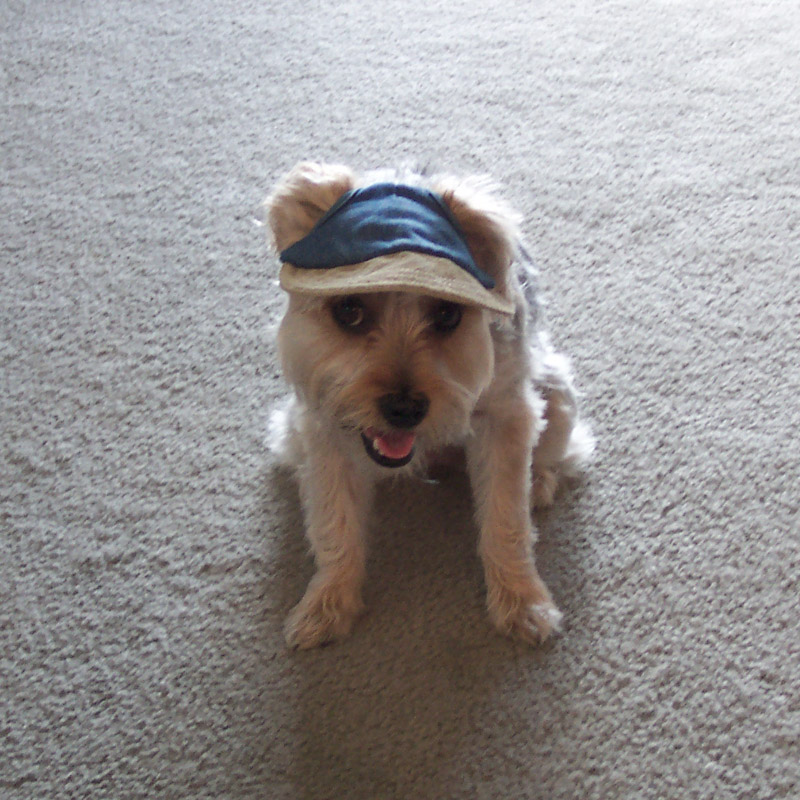 That crazy little furball was around for our life’s highs (getting married) and the lows (the loss of our house). Throughout all of it, though, her love never wavered. Karma was always on hand for a tail wag or a face lick or sometimes just a snuggle by curling up next to you.

In September of last year, Karma began battling a series of illnesses brought on by her advanced age. We thought we were going to lose her, but she miraculously pulled through. In January another health scare threatened to take her away again.

She’s always been stubborn, though, and she pulled through that time, too.

Our dog began impersonating a cat by flaunting her nine lives and dodging some pretty serious bullets: heart disease, failing liver, her back leg joints diminishing, and even a spinal injury. Karma the Dog refused to give up. Over the past couple of months, though, her doctor had noted that her kidneys were beginning to fail. In the grand scheme of things compared to all the other elements, though, this just seemed like one more challenge she’d easily overcome. Karma was handling it okay, but we had noticed over the past few weeks that she was eating less and doing so much less frequently.

While I was in Indiana for Gen Con, Shannon kept calling me letting me know that Karma was beginning to act less and less like herself – and by that Sunday she was barely eating anything at all. I told her that I’d be home Monday and we’d assess everything then.

That Monday evening I cheated to get her to eat by providing her with one of her favorite foods: pizza crust from a local Italian restaurant we frequent. I even got her some peanut butter for desert. She ate it and both Shannon and I almost immediately felt relieved. Relieved, that is, until she threw it all back up while sitting on my lap.

The next morning, I took her to the doctor. She’s been going to the same vet for almost eight years now and Doctor Lisa (that’s what we call her) said there was little we could do at this point. She suggested one last “Hail Mary.” We could try, she said, to see if this was just a passing phase by getting liquids back into Karma’s system via an I.V. and giving her some anti-nausea medicine. Our preciously senior puppy spent the afternoon at the vet and I picked her up later that day still hoping for the best.

For dinner, I cooked some ground beef and Karma ate it happily. This seemed like a good sign. However, she didn’t really eat much, and then she quickly lost interest in eating again. We woke up at around 3:00 AM that night when Karma’s body began giving up and excrement just poured out of her. Shannon and I cleaned up the mess and gently cleaned up our fragile and ailing fur kid. Both us were hoping she’d feel better in the morning, but reality was beginning to set in.

The next day came early (6:00 AM) with Karma waking up again. She looked out of it and a bit discombobulated, but she was still with us. 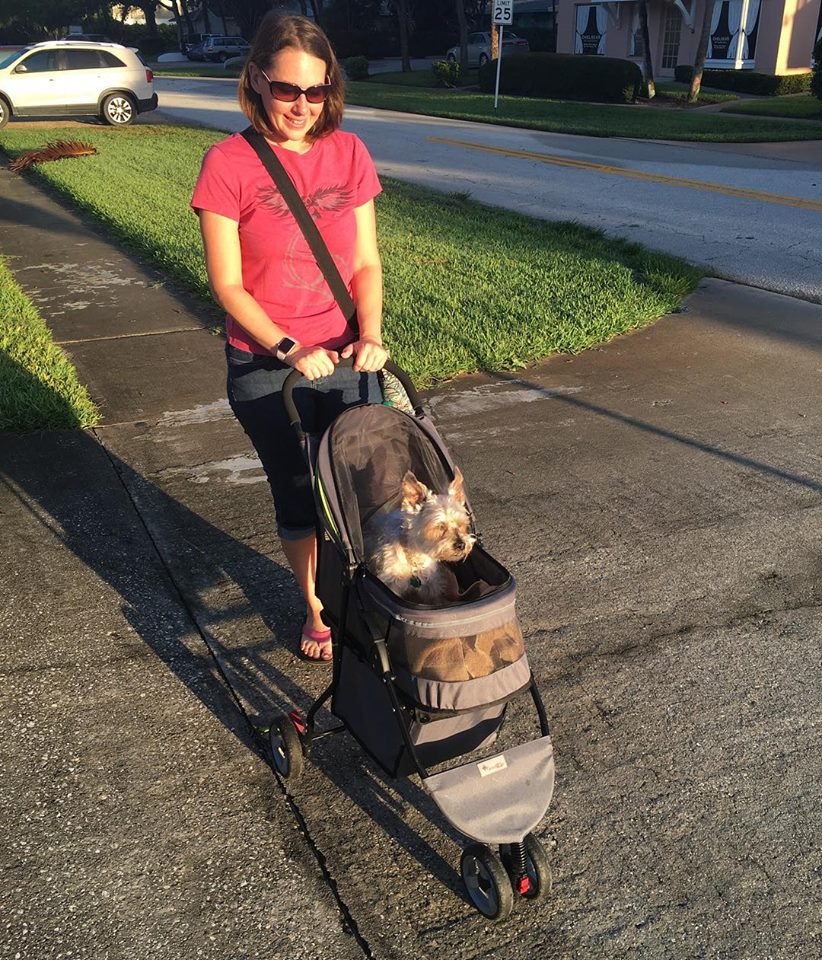 Shannon and I decided to try tricking her into eating again by getting her food she couldn’t turn down: bacon and eggs. The three of us walked down to a local restaurant, The Lemon Tree, for breakfast and ordered food (and extra bacon!) for a family breakfast by the beach with Karma. 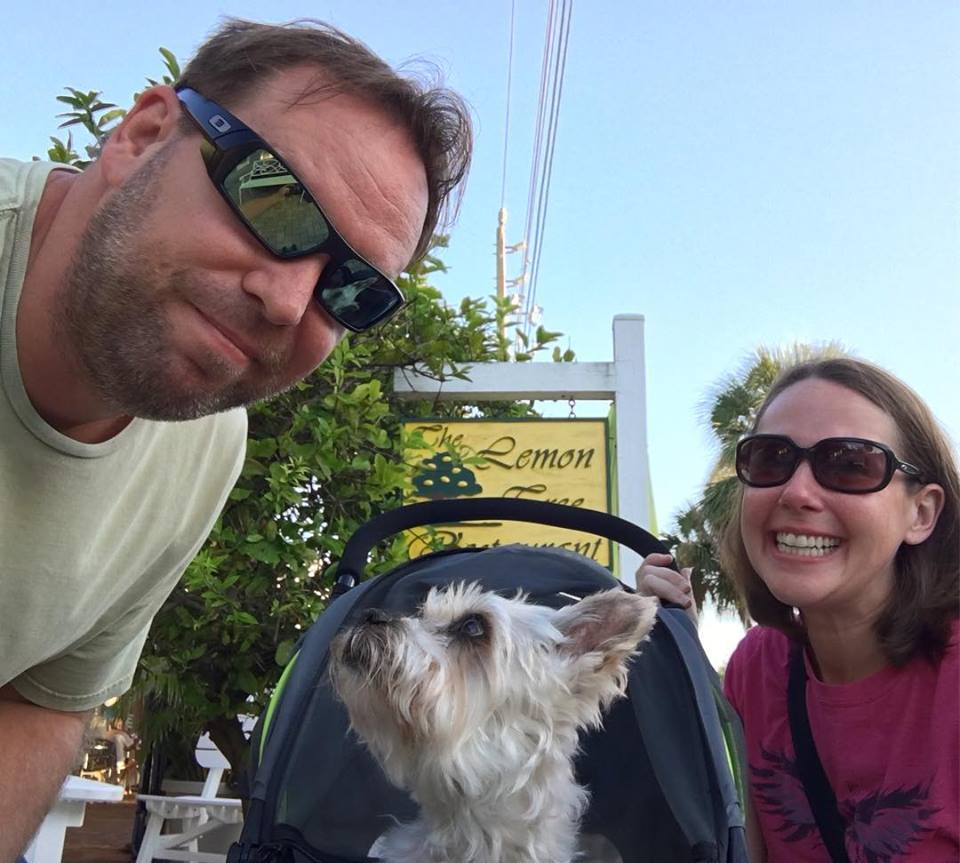 She seemed happy to be with us, but she had zero interest in the food. I presented everything I could to her with desperation weighing heavily on me: bacon, eggs and the pancakes off my plate. Sadly, though, she would just sniff it and look away.

Karma was not going to eat, and after having not eaten for a couple of days, she was at risk of starving to death.

Shannon and I had already discussed the signs with Doctor Lisa about when we would know it was “time” – and we came to the conclusion that we had finally come to that point. I called the vet and let her know that Karma, Shannon, and I would be by around 3:30 PM. I let her know, however, that I would call if there was any change.

We walked out by the beach ignoring any and all “NOTICE” signs. 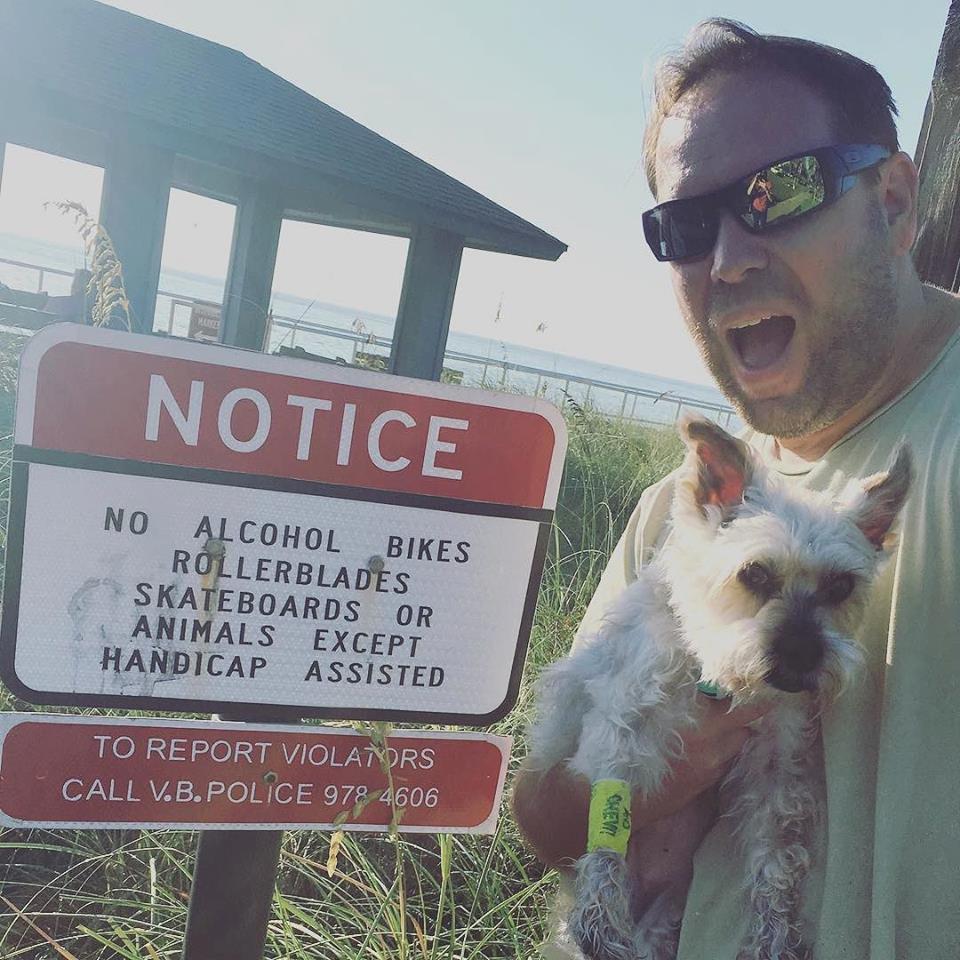 We took her out by the water. She loved the smell of the ocean air. It was genuinely one of her favorite things once we moved out by the beach. 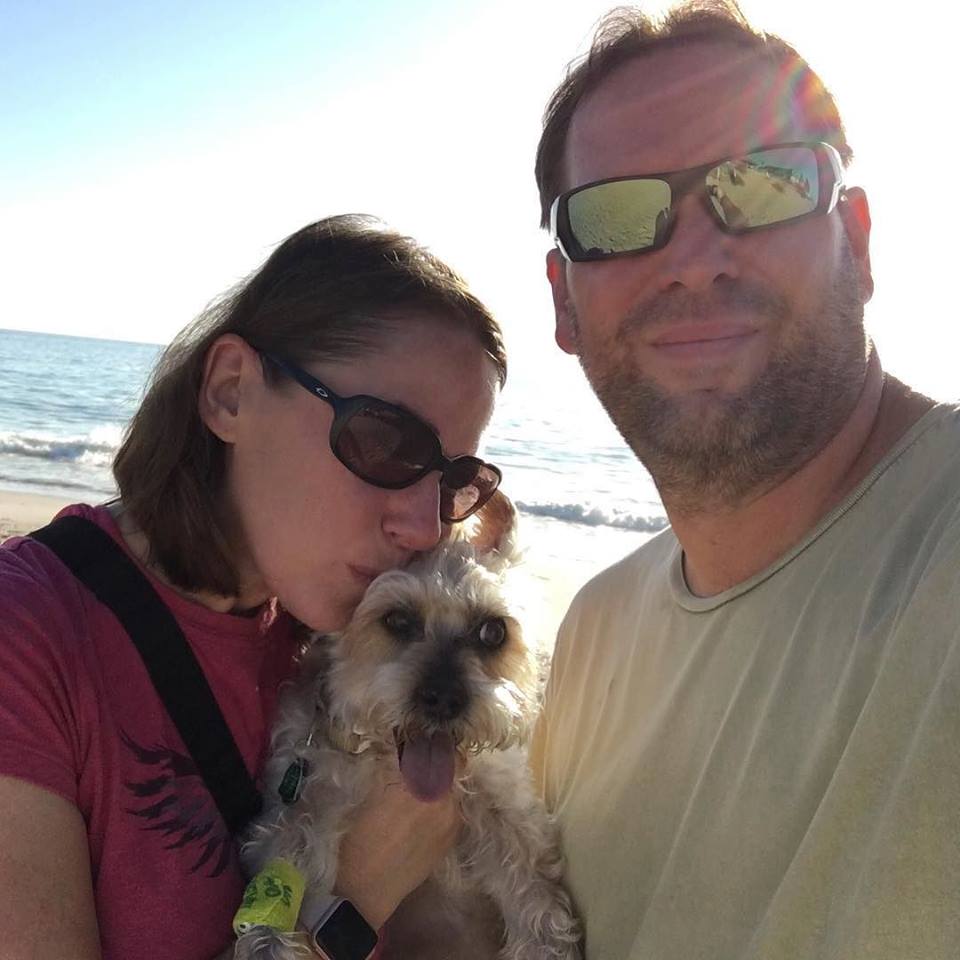 If this was going to be Karma’s last day, we were going to make sure it was the best fucking day ever. Sitting on the beach with her early in the morning is one of those “life moments” that will stay with me forever. 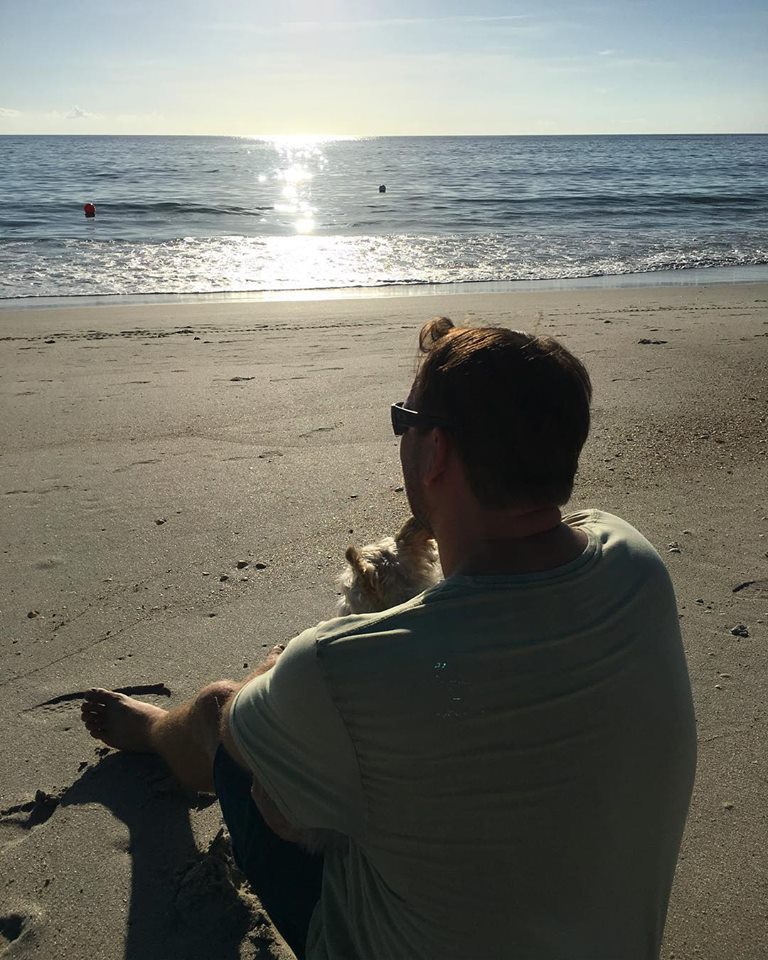 Afterwards, we all went back home to spend time doing one of her favorite things: laying on my stomach while we watch T.V. She loved being close to me and hearing my heartbeat. I could feel her old exhausted body breathing on top of me. No matter how advanced in age she was, though, she was still my “baby Karma”. 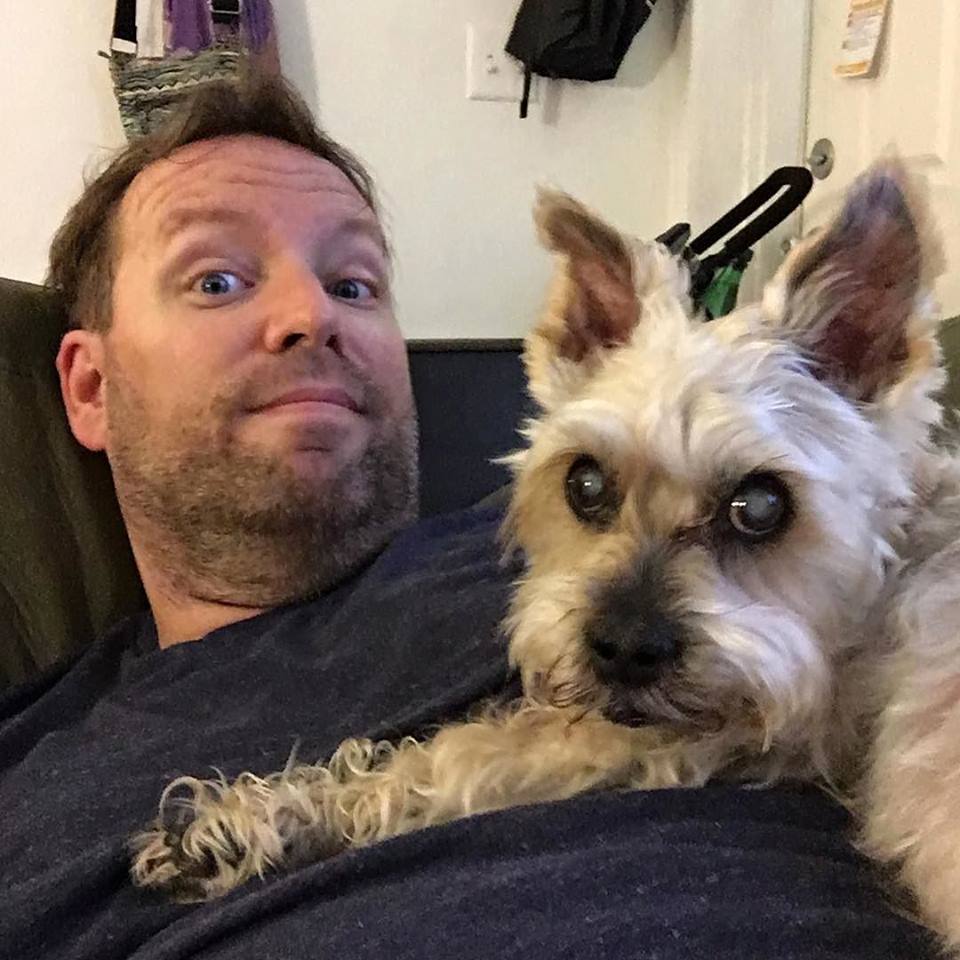 She was tired and almost immediately passed out. 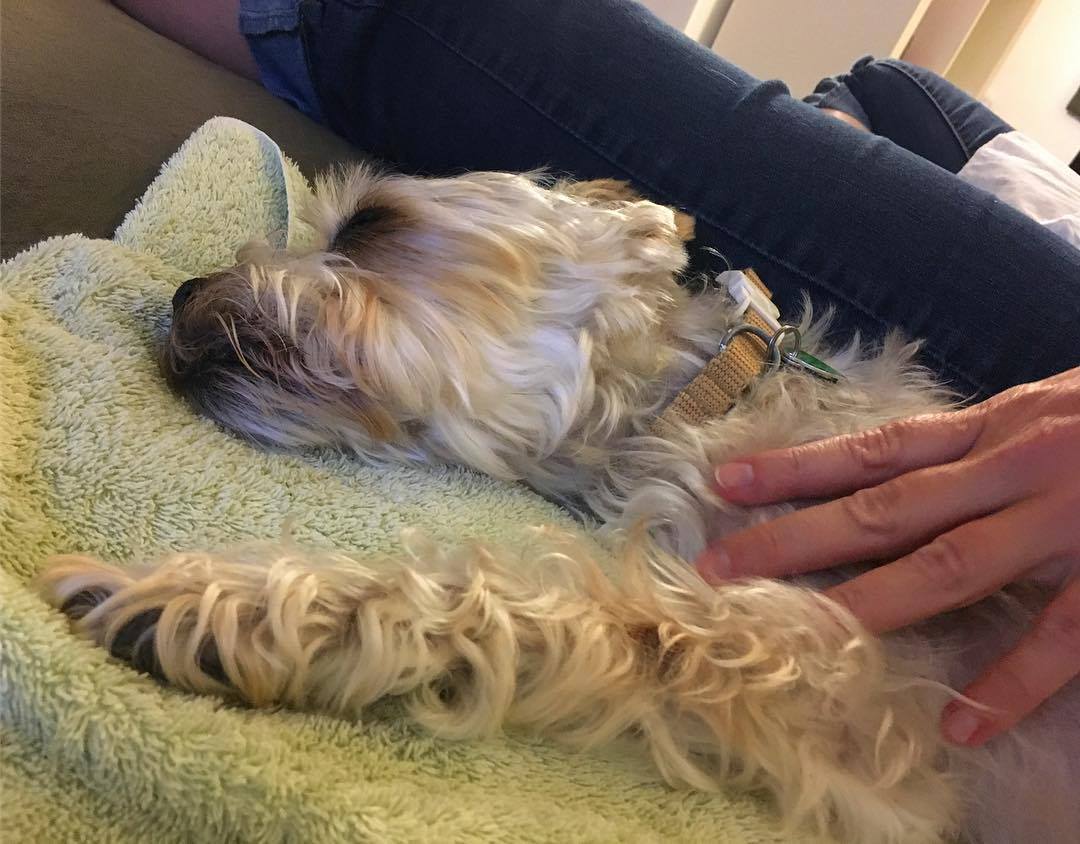 Later that morning, “Aunt Tracy” (my sister-in-law) came to visit to say good-bye. Karma lit up when Tracy walked in, and we could see her radiate happiness in seeing another familiar face that loved her. The three of us took Karma to the beach one more time. 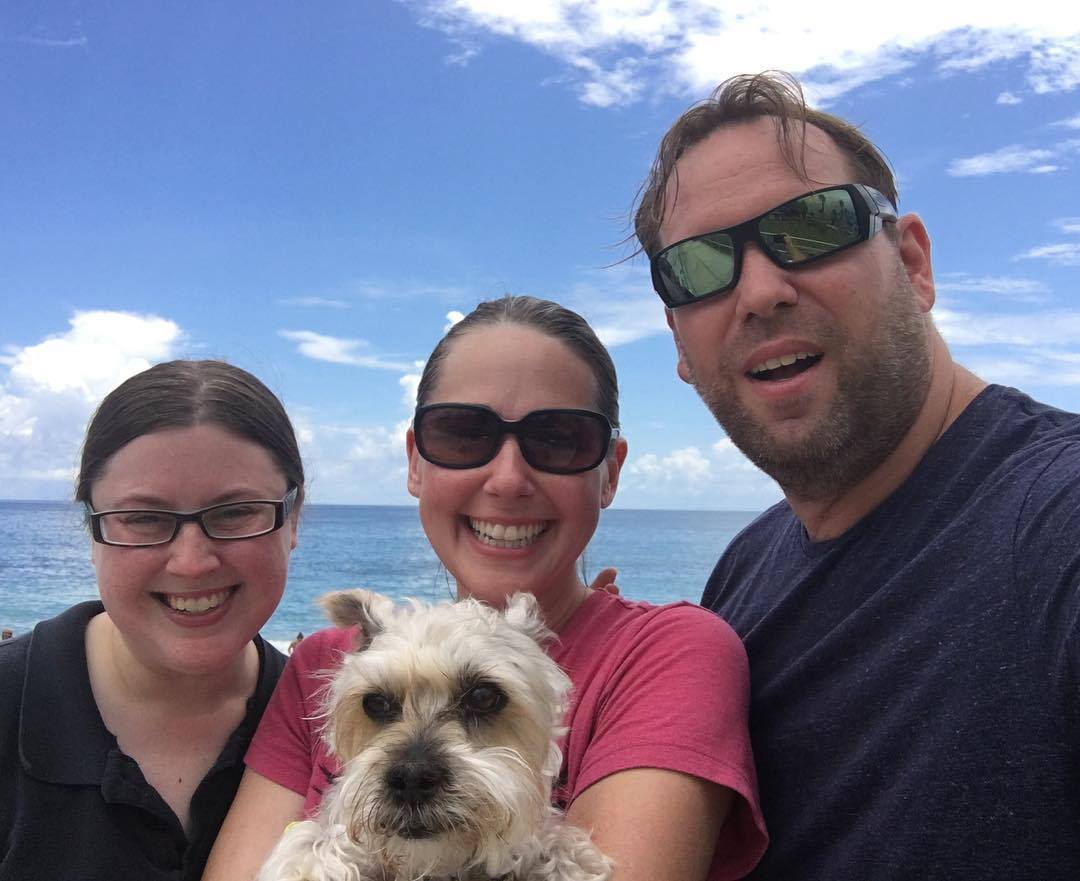 In a last ditch attempt to see if we could steer Karma back to normal, we returned to that Italian place with the pizza she loved so much. We sat outdoors and I cut up the crust into little pieces for her. 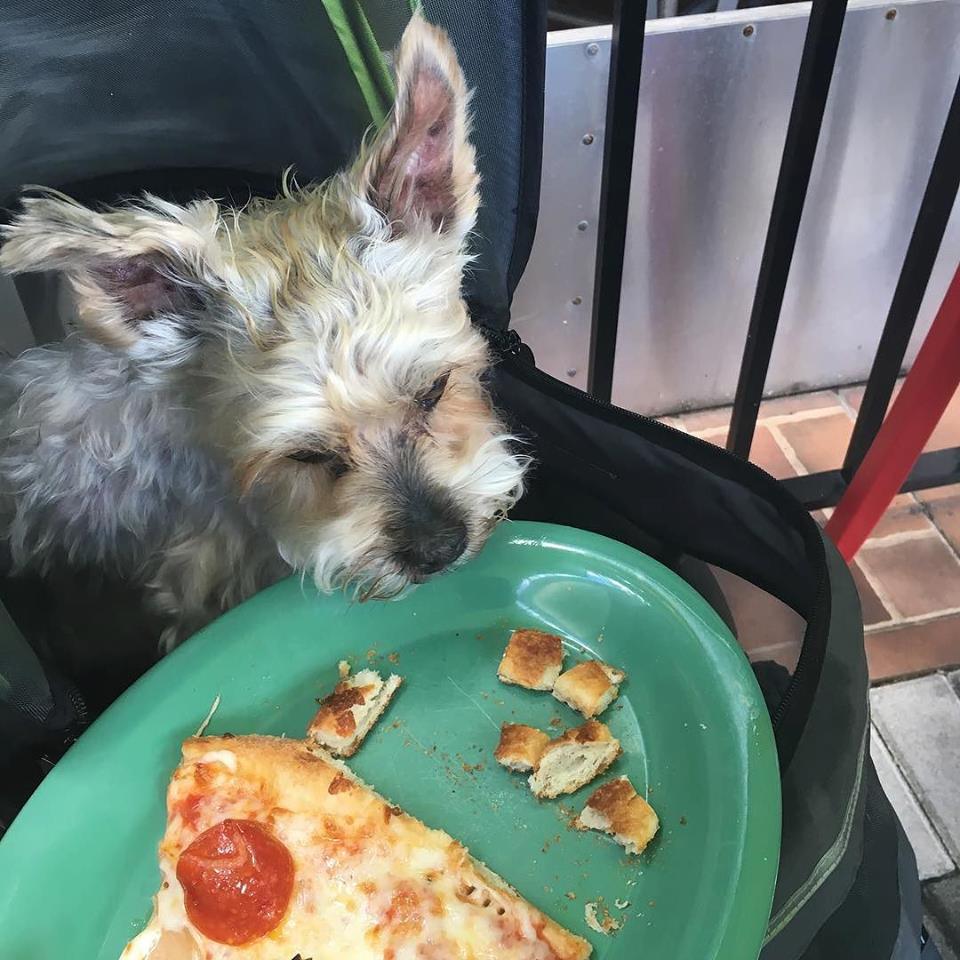 She put a piece in her mouth, tasted it for a moment, and then spit it out without chewing. We repeated this a few times, but Karma was still refusing to eat. This removed any doubts we were still harboring. Karma the Dog – sweet, loving, caring, beautiful, devoted, amazing, and warmhearted Karma the Dog – was done and ready to move on. Our options were to keep pushing the issue until she passed from lack of eating, something we would never let happen, or to let her go on her own terms. We chose to listen to what she was asking of us through her actions. She was letting us know that it was okay.

As the day pressed on, her health continued to decline. She was tired and napping constantly, but the naps were less peaceful. The age and her failing kidneys were taking a toll. We didn’t want her to suffer any more. 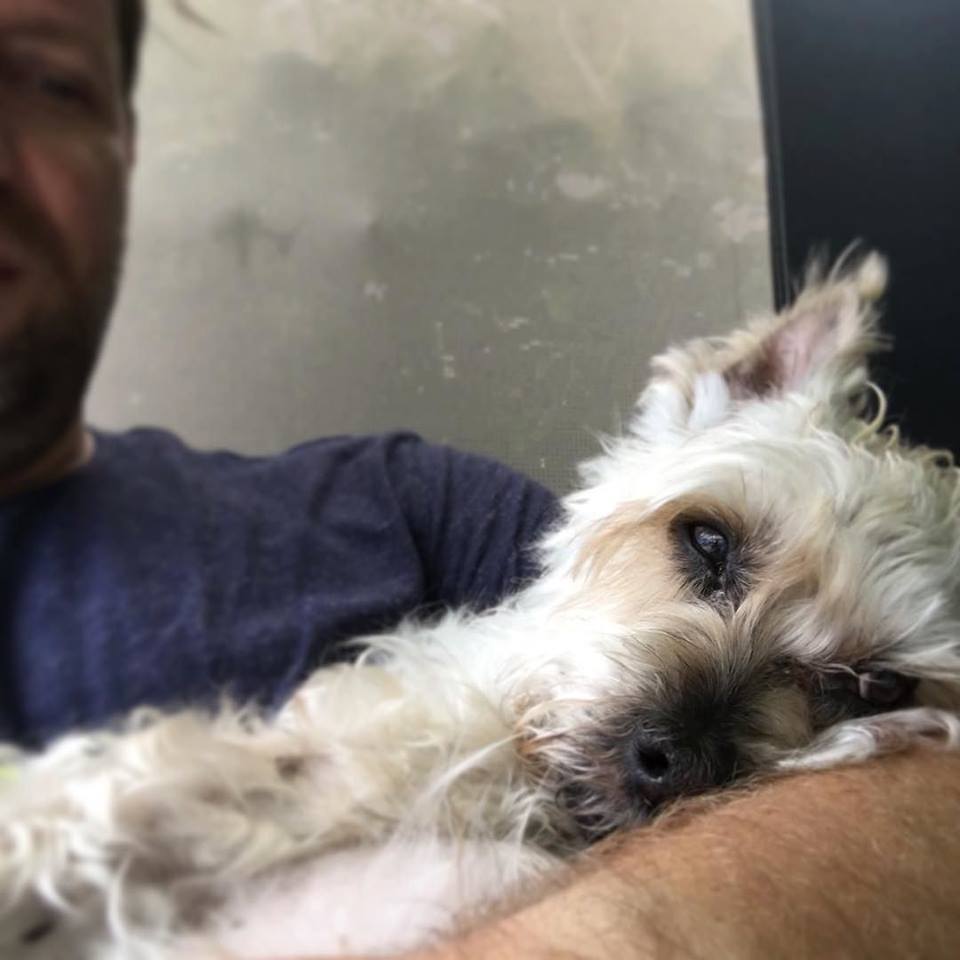 Tracy left to head home and Shannon and I just held Karma and cried. We loved her, and we wanted her to stay, but we knew that she was ready to go. I’d always heard that from other dog owners: “You’ll know when it’s time.”

I never really understood that until our connection with this tiny living and breathing ball of love let us know.

She was ready to move on. Karma was tired, and we didn’t want her starvation and kidney failure to progress into pain.

So, at 3:00 PM, we got in Shannon’s car and headed to go see Doctor Lisa. Karma could barely hold her own head up, so I helped her so she could enjoy the wind in her face with the window down. 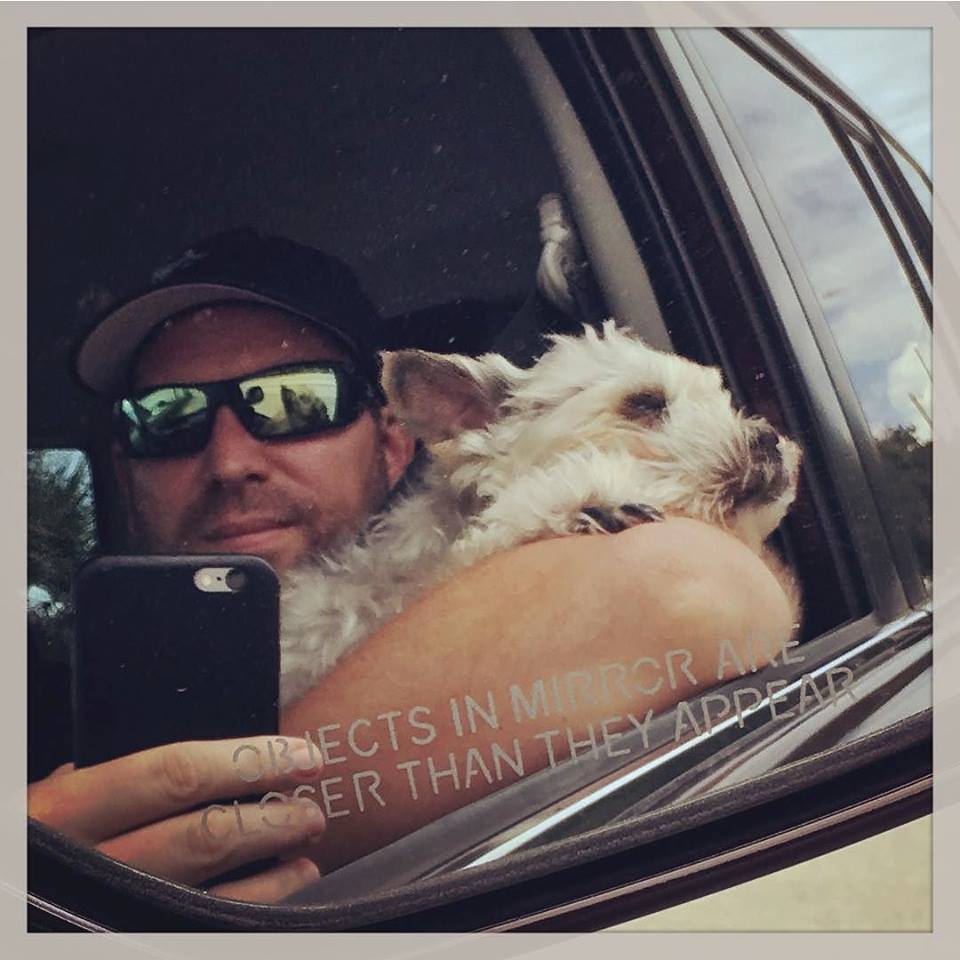 We got there and we tried to act prepared for something no one is ever prepared for: to say good-bye that final time. We walked in and brought her bed and teddy bear so she would be completely comfortable. With tears streaming down our faces, we finished the necessary paperwork and paid all the required fees in advance. At this point, she was curled up in her bed and was barely able to hold her head up. The doctor weighed her and she was down to only ten pounds. Her normal weight was close to fifteen, and just yesterday she clocked in at eleven.

Doctor Lisa gave her an injection of morphine. Shannon and I caressed her slowly repeating in low tones that we loved her and what a “good girl” she was.

She was our baby Karma.

After a short while, Karma was passed out and was became oblivious to the world around her. She was resting without pain. Dr. Lisa gave her an injection of something blue. Then, with my hand resting lightly on her side, Karma stopped breathing.

Doctor Lisa pointed out that Karma succumbed very quickly and without resistance. This was, according to her, a sign that she was “ready to move on”. We stood there. Crying. However, we knew that Karma was no longer in any pain and that, in her final moments, we were there for her.

That one hour was easily one of the worst hours of my entire life. One horrible, dreadful, painful, and absolutely gut wrenching hour paid in exchange for thirteen years and two months with one of the most amazing souls to enter our lives. 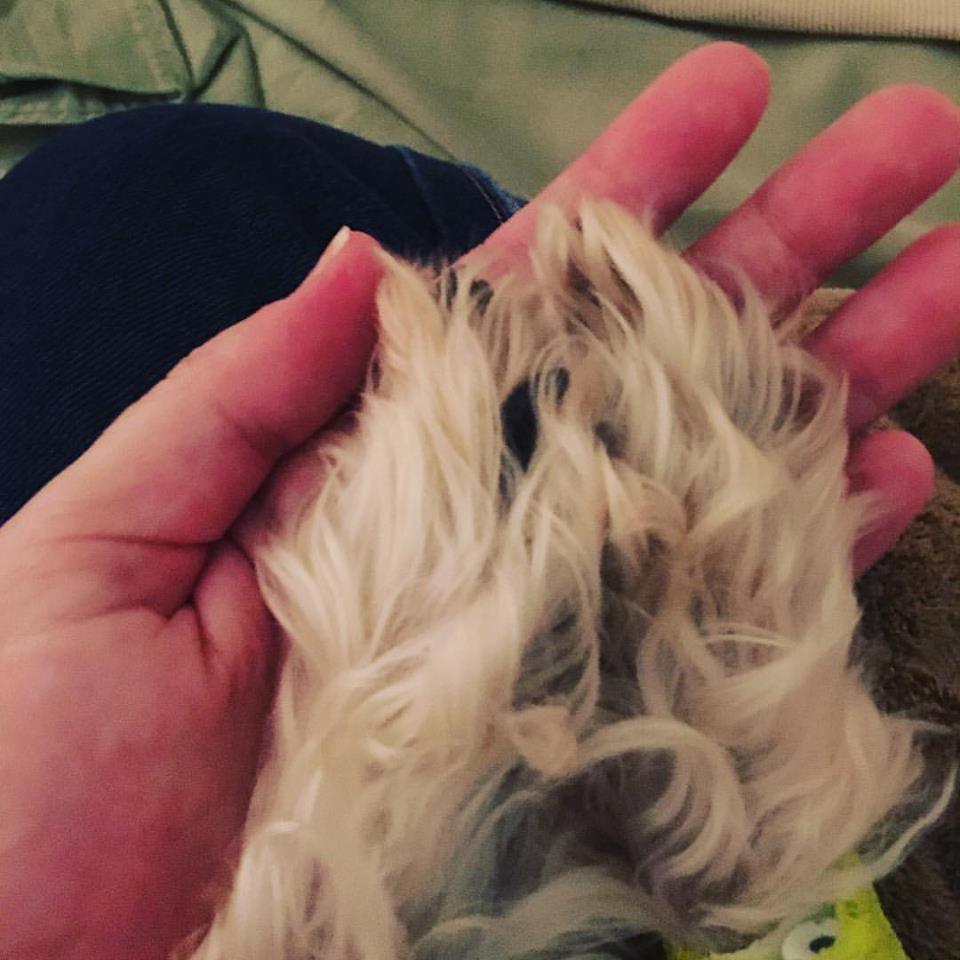 I’m Still Not Dead and Other Health Updates

The Blog Post About That Time I Almost Died (which was, by the way, the Sunday before last)