I’m pretty proud of the fact that I live my life like an adventure.  Each step I’ve taken on this meandering quest to not be normal has led me through a series of ups and down.  2013 really tops the charts for activity, though.  This past year I drove a car up Mount Fuji, suffered the loss of my father, and turned forty.

And there’s a bunch of stuff in between.

So here’s a recap of my so called life in the past twelve months.

I spent the first month of last year doing the same thing I’ll spend the first month of this year doing: working my ass off to prep for the rest of the year.  Last year I was knee deep in Florida Anime Experience and Project Anime.  I stayed in Florida for the month, but I did find my way Tampa to ride some coasters at Busch Gardens.

The next month I found myself in Dallas, Texas (for Project Anime/Anime Expo) and San Francisco.  While in San Francisco, I saw all the sites and even checked out a local anime con: Anime On Display.  We also popped down south to check out the Google campus, Apple headquarters, and the old Steve Jobs house.

March I spent at home working again.  I did find time to spend time at one of my guilty pleasures: the local fair.  At the end of March, though, is when life got REALLY amazing: I caught a plane for Los Angeles and, from there, to Tokyo, Japan.  I had already been to Japan in 2012, but this time I was able to bring Shannon along for what would be one of our greatest adventures.  While there we did so much: Harajuku, Yoyogi Park, Shibuya, Tokyo Disney SEA, and Fuji-Q Highlands.  The highlight of the trip, though, was the day we rented a car and drove it through the countryside and then up (UP!) Mount Fuji.  The experience was nothing short of breathtaking.

April was spent recovering from jetlag and spending time at home.  In the midst of doing final prep for Florida Anime Experience, we managed to squeeze in a barbeque at home with friends that featured a marathon of the Fast and Furious movies (in anticipation of part six coming out the next month.)

May was, of course, Florida Anime Experience.  Year three of the convention was a critical and commercial success.  The finale of the event was going with the GME production team to see Fast & Furious 6 in a local theater afterwards for (as Shannon likes to refer to it) “popcorn dinner”.  Earlier that month, though, something else amazing happened.  Plans were made for my 91 year old grandmother to have all of her family surprise her on Mother’s Day.  The result was the first time all of the Polish cousins were in the same place at the same in more than a decade.  Good stuff.

June was back to work for our other upcoming events: PinUpalooza, Florida Comics Experience, and WasabiCon.  I was a slave to the office, but I did manage to get out to one event that month: The Hukilau in Fort Lauderdale.  Other than that: work, work, and more work.

July found me back in Los Angeles for Anime Expo and Project Anime.  I really tried to cram as much of everything into that first week as possible including a stop by Neptune’s Net in Malibu because, you know, it was featured in the first Fast and the Furious movie.

While in California, I saw some friends, visited some sites, attended Anime Expo, and then caught a red-eye and made it to Miami for the last day of Florida Supercon.  That’s right: I attended two cons on opposite coasts in one weekend.  BOOYAH.

The rest of the month was work on the upcoming Florida Comics Experience.  I did, though, find my way to two other conventions in July: Megaplex and the Gamewarp Gaming Show.  At the latter of the two, Joey Snackpants had some fun with the (in)famous Billy Mitchell from the documentary King of Kong.

August was spent jumping from event to event.  First, we launched a new event, Florida Comics Experience, in Melbourne, Florida.  It was a hit and VERY well recieved by local fans.  Just a few days later, I was on a plane with Shannon and Ryan to run events at Gen Con in Indianapolis, Indiana.  That convention is ALWAYS a good time and, from there, I had a weekend at home (sleep!) and then up to Atlanta for Dragon Con.  Somewhere in there I managed to check out an NXT Wrestling event.  Sometimes I just wind up in the strangest of places…

September just kept me running as we prepped for our last two shows of the year.  PinUpalooza is the proverbial bastard step-child of our geek events, but it’s probably the one I always get the most excited about.  Aside from the obvious reasons (boobies,) the event is an ever evolving mishmash of fandom soup and I’m always excited to see where it’s going.  PinUpalooza was decently attended, but MAN – those articles!  Both Orlando Weekly and the Orlando Sentinel ran raving reviews of the show which left me very proud.  After PinUpalooza – I managed to take a day to Universal Orlando and finally ride the new Transformers ride.

Then, for the first time in as long as I can remember, Shannon and I went to Halloween Horror Nights.  For those of you that don’t know, I used to be a stage manager for the event “back in the day,” so seeing it from an attendee point of view is always interesting.

I kicked off October with a trip to Walt Disney World in Orlando, Florida with a visiting friend from California.  We hit up the Food & Wine Festival at EPCOT and, as usual, ate WAY too much.  Then it was off to Austin, Texas to begin work on InvaderCON III: FINAL DOOM (thanks to a successful Kickstarter over the summer.)  While there, I drove over to San Antonio, toured a large number of hotels, and ate a donut the size of my head.  Honestly, I’m pretty sure that’s all Joey Snackpants and I did in Austin: eat, visit potential convention location, eat, visit potential convention location, eat…

You get the picture.

November kicked off with WasabiCon which DOUBLED in size from 2013.  It was an amazing event and I’m proud of what that convention has become in just eighteen short months.  A week later, I got on a ship for our annual anniversary trip.  Shannon likes cruises because I can’t use my cell phone or the Internet, and we found our way to Curaçao and Aruba.  Quiet times on the ocean…

And then everything changed.

Just a couple of days after getting back from the cruise, I received a phone call that would bring my rollercoaster year to a dead stop: my father, overcome from the grief of losing his wife eighteen months before, took his own life. 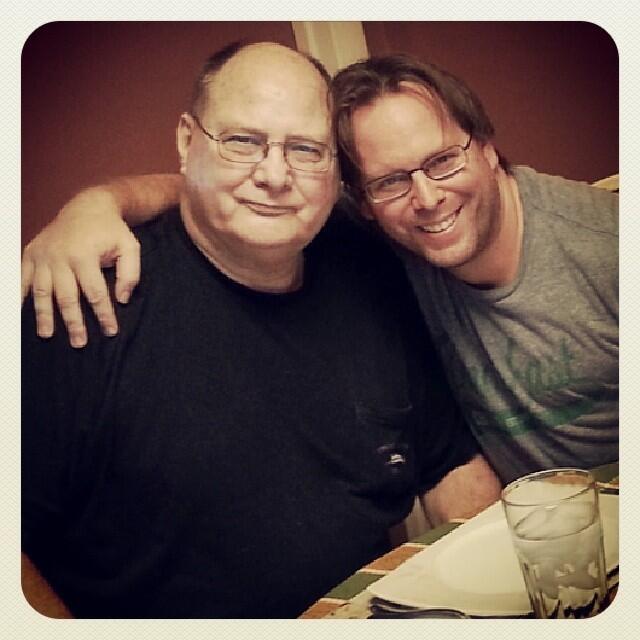 To be completely honest, the past month has really been a hazy blur.  After the death of my father, I had to become “the strong one” and start the process of piecing together closure in his life.  It has been hard and I have, as a by-product, become somewhat of a hermit these past few weeks.  As everyone promises, though, is HAS gotten easier to cope.  It will never “get better” – but is getting easier.

December was spent at home getting things in order in my home and his.  We did manage to squeeze in one event, Cosplay Christmas, and it was a great turnout for year two.  I also, quite unceremoniously, turned forty years old.  I didn’t really hear from my friends on my birthday, but – then again – what do you say to someone right after something so tragic has happened?  Who knows.

Other than that, I spent a lot of time at home coping, thinking, and trying to make sense of a lot of things.

A great movie isn’t great because of one single thing.  It’s great because it connects with an audience on a variety of levels and emotions.  Good films are happy, exciting, and often tragic at times.  That’s how I feel about this past year.  It really was a GREAT year, even with the negatives.  I mean, look at everywhere I went in the past twelve months:

Not too shabby, aye?

I’m still in a bit of a haze, but the clouds are clearing and 2014 is coming into focus.  I’m excited about a new year because it is an excuse to have a fresh perspective and, in four decades, I’ve always opted to have a positive one.

See you next year.